Are canvas bags the solution to fewer deer-related car crashes? Two experts from the Teton Research Institute think so, as... 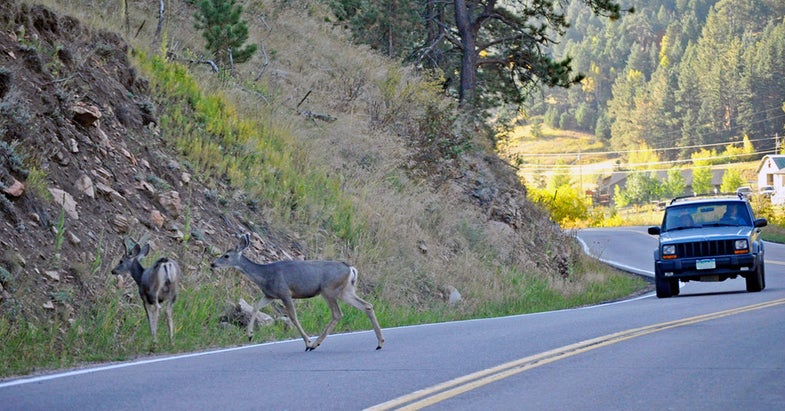 Are canvas bags the solution to fewer deer-related car crashes? Two experts from the Teton Research Institute think so, as Deseret News reports, after conducting an experiment that involved tying white canvas sacks over wildlife reflectors along four Wyoming highways, where deer-car collisions are a frequent problem.

Traditional red reflectors disperse a vehicle’s headlight beams across the road, which alerts wildlife of approaching vehicles. However, the study found that there was 65 percent fewer deer carcasses when the reflectors were covered with white bags. Researchers Corinna Riginos and Morgan Graham tested the use of black bags, as well, but found red reflectors were still 32 percent more effective.

Riginos and Graham believe the white bags appear similar to how deer alert one other of danger: by flipping their white tails. Another possible explanation is that the white bags are more visible to deer than the traditional red reflectors.

Based on the results, the Utah Department of Transportation is considering swapping its current wildlife-diversion signs with white bags, given the state has a high frequency of deer-car collisions, with more than 5,600 mule deer and elk killed in 2014.

“I think it’s really interesting,” says Brandon Weston, UDOT’s director of environmental services. “It’s good to see new innovations being tested. If it proves to be an effective solution, it’s something we would definitely be interested in trying.”

If something as simple and inexpensive as white canvas bags could save deer and prevent car crashes, then it seems any state with a high number of deer-related collisions could implement the strategy, regardless of budgetary constraints.