Welcome to the first-ever Field Notes photo-caption contest. This photo of a raccoon riding an alligator may or may not... 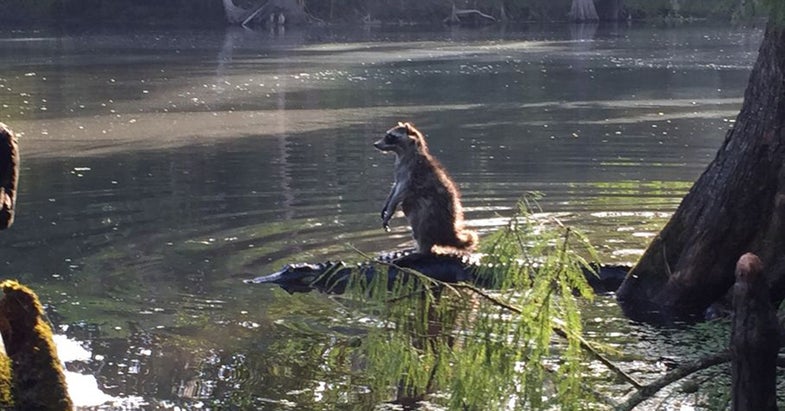 Welcome to the first-ever Field Notes photo-caption contest. This photo of a raccoon riding an alligator may or may not be real, but it is caption-contest gold.

The picture was sent to a central Florida TV station by a man named Richard Jones, who claims he was walking with his family in the Ocala National Forest when he spotted an alligator. Jones says as he prepared to take a picture, a raccoon, possibly startled by his son, hopped onto the gator’s head. Jones says he “snapped a lucky picture right when the gator slipped into the water and before the raccoon jumped off and scurried away.” Jones told WFTV, “Without the context you’d think the raccoon was hitching a ride across the river.”

Jones left no return phone number, and since the picture surfaced last month it’s become a subject of internet debate and, of course, a whole bunch of Guardians of the Galaxy jokes and memes. Now it’s your turn. You’re playing for a grab bag of Berkeley Havoc and Gulp bass baits. Have fun with it.