The recent discovery of a rare, almost mythological, cave-dwelling albino catfish in Texas is not only catching the attention of... 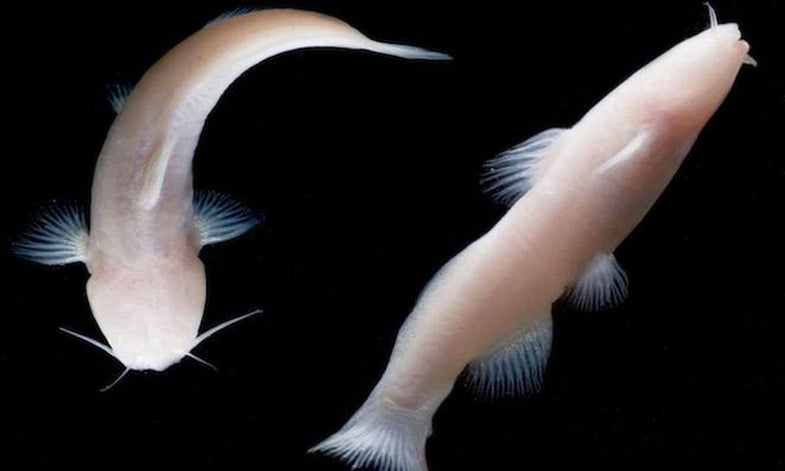 The Mexican Blindcat was only rececently discovered in the United States.. Dante Fenolio via the University of Texas at Austin
SHARE

The recent discovery of a rare, almost mythological, cave-dwelling albino catfish in Texas is not only catching the attention of biologists worldwide, it’s leading to the question of whether underground, water-filled caves are part of an interconnected system spanning the Lone Star state into Mexico.

Treehugger.com says rumors of the fish’s existence have circulated through the scientific community for nearly 50 years, but because a specimen had never been produced, its existence was classified as a myth. But in 2015, inside one of Amistad National Recreation Area’s limestone caves, National Park Service resource manager Jack Johnson saw a pale, slow-moving fish with pink eyes. He returned last month with biologist Peter Sprouse and found the fish again, which have since been identified as endangered Mexican blindcats.

While the tiny fish already inhabits the Edwards-Trinity Aquifer near the Rio Grande basin in Texas and northern Mexico, the location of the latest finding underscores the theory that there’s a much larger system of water under the earth’s surface since the fish live exclusively in groundwater.

“Since the 1960s there have been rumors of sightings of blind, white catfishes in that area, but this is the first confirmation,” said Dean Hendrickson, a curator of ichthyology at The University of Texas. “I’ve seen more of these things than anybody, and these specimens look just like the ones from Mexico.”

First discovered in 1954 in springs in Coahuila, Mexico, the government classified the blindcat as an endangered species, while the U.S. Fish and Wildlife Service designated it a foreign endangered species. The two fish seized by Sprouse and Johnson were relocated to the San Antonio Zoo and a specialized facility created to study cave and aquifer species.

“The San Antonio Zoo has a series of labs specially designed to keep subterranean wildlife safe and healthy,” said Dante Fenolio, vice president of conservation and research at the zoo. “The fact that the zoo can participate now and house these very special catfish demonstrates the zoo’s commitment to the conservation of creatures that live in groundwater.”