A herd of 21 elk died in Colorado on the last weekend of December, when the animals plunged through thin... 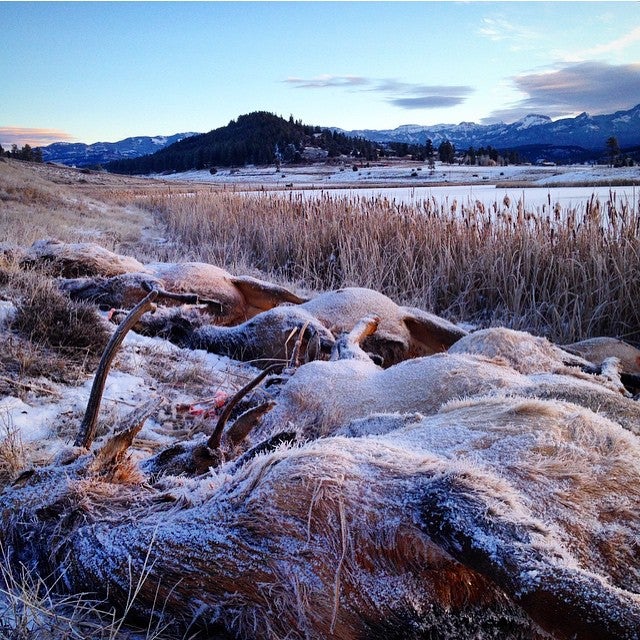 A herd of 21 elk died in Colorado on the last weekend of December, when the animals plunged through thin ice on the 118-acre Echo Canyon Reservoir. According to NBC affiliate KUSA, Colorado Parks and Wildlife officials responded to several calls from residents reporting dead elk floating in the reservoir and arrived to find the herd only about 50 feet from shore. They believe the herd fell through the ice and died sometime the night before.

A photo of the frozen elk carcasses, posted to Instagram by Misha Garcia and later published with a story on Pagosasprings.com, has since gone viral, and online traffic overwhelmed the community news website to the point that it needed to shut down. People wrote in asking if the meat from the animals could be salvaged, but the carcasses had already been brought to a landfill.

Wildlife officials used the incident to warn people against attempting to rescue big game animals through the ice. While it’s not common for elk, which weigh between 300 and 1,000 pounds, to fall through ice and drown, there have been similar incidents in Colorado in years past. In 2008, 19 elk drowned after falling through ice on Paonia Reservoir in Delta County, and officials rescued three of four elk that fell into a private pond near Pagosa Springs in 2011. One elk couldn’t be saved in that incident.