File photograph courtesy of Lake Clark National Park & Preserve/Flickr At the confluence of the Columbia and Okanogan rivers, sockeye... 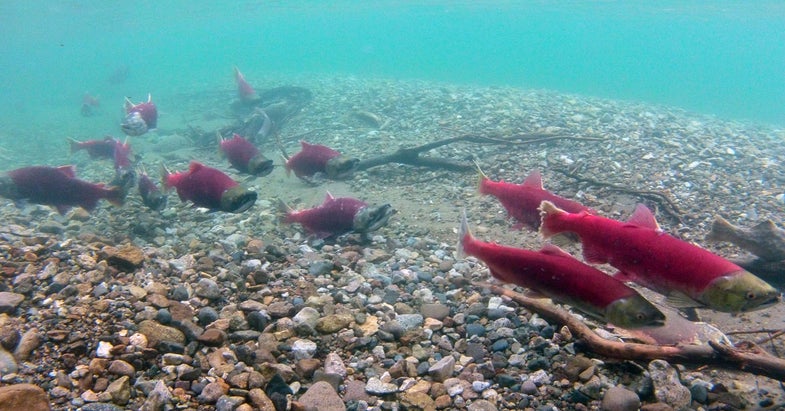 At the confluence of the Columbia and Okanogan rivers, sockeye salmon should be preparing for a mass surge toward cooler waters in northeast Washington, British Columbia, and the Pacific Ocean. However, high temperatures and low mountain snowpack have rendered portions of the Columbia and Okanogan utterly inhospitable for the fish, with water temperatures rising above 70 degrees. The Seattle Times reports that, because of this, sockeyes in the Columbia are taking hasty refuge in an inlet leading to the Little White Salmon River, which contains cooler water fed by glacial runoff, instead of advancing forward. This poses a problem, as the Little White Salmon River is hundreds of miles from the sockeyes’ spawning grounds, and many of the fish have begun dying from bacterial disease before they can reach these distant waters.

According to The Los Angeles Times, more than 400,000 sockeyes were projected to make it to the Brewster Pool, where the Columbia joins the Okanagan, but biologists say that fewer than 180,000 have passed the nine dams between Brewster and the Pacific Ocean. Even more startling, only 30,000 are now expected to make it to their spawning grounds, and federal fishery experts expect to lose more than 80 percent of sockeyes across the Columbia Basin.

If the salmon fail to reproduce before perishing, it could create a dire situation for the species. However, in the mid-1990s the sockeye population dwindled to between approximately 30,000 and 50,000 fish entering the Columbia Basin. Since that time, billions of dollars have been spent restoring the sockeyes’ habitat, increasing water flow, and improving fish ladders at dams. These efforts have greatly bolstered sockeye populations in the area, but now fishery managers could have to take additional measures to protect them. Russell Bussanich, an Okanagan National Alliance fishery biologist, says future solutions could include closing recreational fisheries more often, as well as trucking salmon from the lower Columbia to Canada.