Last Friday, Clayton and Jennifer Wells stopped by their hunting cabin near Ariton, Ala., when they suddenly found themselves in... 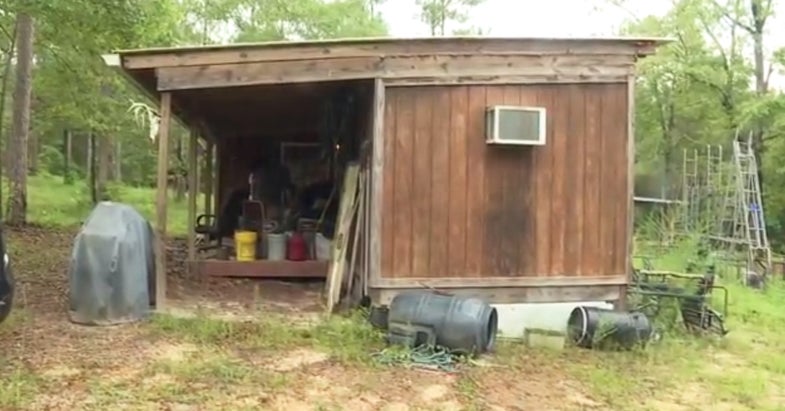 The escaped convict had been missing since June and was armed with a knife.. WTVY screenshot
SHARE

Last Friday, Clayton and Jennifer Wells stopped by their hunting cabin near Ariton, Ala., when they suddenly found themselves in a standoff with an escaped convict.

WTVY reports that Mr. Wells, a retired federal correction officer, first noticed something was off when, upon arriving at the cabin, he noticed blankets had been hung to cover the windows. After drawing his Glock, he approached the front door. According to WSFA, Mr. Wells entered the cabin just as Jeffrey Scott—who, in late June, escaped from a work release center in Mobile, Ala., where he was serving out a drug-trafficking conviction—was walking past with a knife in hand.

“I told him ‘Drop the knife,’,” Mr. Wells told WSFA, “and he wouldn’t so I finally fired a shot, and he threw the knife by the sink. He has a fanny pack on and that point he starts reaching for the fanny pack, and I said ‘Keep your hands away from the pack.’ He said, ‘I just want a cigar.’ I said ‘You’re not getting anything out that pack,’ and I said, ‘I’ll shoot you if you don’t comply with what I’m telling you’.”

At this point, Mrs. Wells drew her weapon and called authorities.

Scott reached for his fanny pack again, however, and Mr. Wells fired another warning shot. “Eventually, after the second shot, [Scott] got down on his hands and knees and crawled,” Mr. Wells told reporters. “I got him down on the porch and got the fanny pack away from him and within a couple minutes the sheriff’s department arrived.”

Law enforcement arrested Scott. The Wells family received $1,000 for helping to capture the convict, but they said they plan to donate the money to the county K9 unit. The reports do no specify what Scott may have been reaching for in the fanny pack.