Dog Found After Missing for 42 Days in Yellowstone

Photographs via Bring Jade Home/Facebook Jade, a 14-month-old Australian shepherd, was lost in Yellowstone Park for 42 days until she... 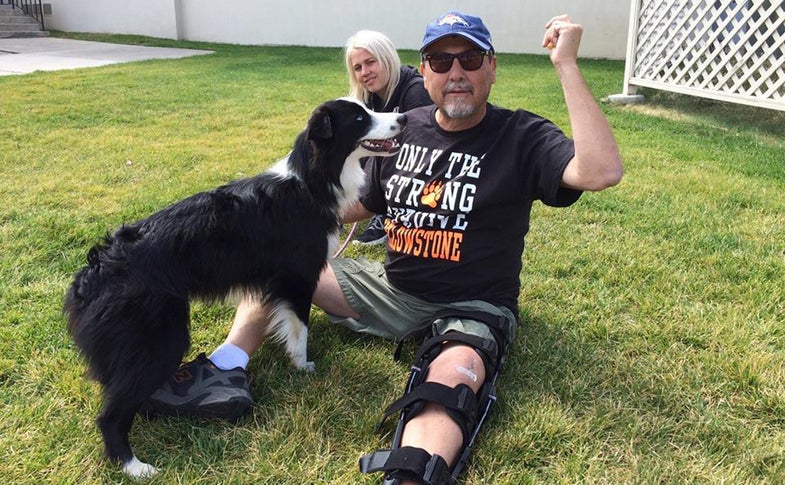 Jade, a 14-month-old Australian shepherd, was lost in Yellowstone Park for 42 days until she was reunited with her owner, David Sowers, of Denver, on Friday. According to the AP, Jade had lost weight and had a cut on her lip, but was in otherwise good health.

The ordeal began when Sowers and his girlfriend were driving through Yellowstone on July 23, with both their dogs crated in the back of their SUV. The driver of an oncoming car fell asleep at the wheel and crossed into the other lane, and the collision broke Sowers’s arm in two places, his wrist, and two ribs, and shattered his knee. Gillice suffered only minor injuries.

During the crash, however, Jade’s crate was shattered, and when rangers opened the doors to get Sowers out, the frightened dog bolted.

Sowers had to return home to Denver for knee surgery. After 15 days of hearing no word about Jade, he began receiving reports that the dog had been spotted around the park, so he and Gillice made three futile trips back to Yellowstone to look for her. Sowers, already recovering from major surgery, said the search was hard on him. “When I am looking for her I am crying and bawling,” he told the Bozeman Daily Chronicle, before making one last trip to the park. ” I’m not sure I can go up there again.”

On Friday, September 4, Gillice was walking the couple’s other dog in Yellowstone when she saw a white spot in the distance. Soon, she said, “[Jade] started running toward me.”

Now reunited with the dog, Sowers can concentrate more fully on his recovery. “I haven’t been following doctor’s orders very well,” he said. “They told me not to be doing this, but I wanted to find my dog”