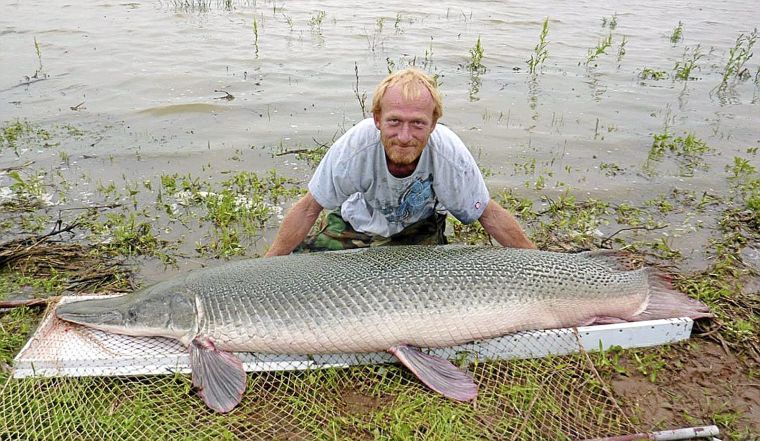 Paul Easley of Mead, Oklahoma was fishing Lake Texoma on April 23, 2015, when he pulled out what’s being hailed as the biggest rod-and-reel caught fish ever landed in the Sooner State—an 8-foot long, 254 pounds alligator gar.

A story from Tulsa World says Easley’s fish easily tops the former record, a 91-inch long, 192 pound fish, from the Red River, and that it needed to be weighed on a special sling and platform the Oklahoma Department of Wildlife Conservation (ODWC) designed for just such occasions.

“As you can imagine, it’s a challenge to find a scale where you can weigh an 8-foot long fish. So we had that made for weighing these big fish,” ODWC spokesman Micah Holmes told Tulsaworld.com.

It’s believed Easley’s fish was between 45 and 55 years old, but to accurately gauge its age, the fish would have to be killed so biologists could examine a special bone, the otolith, from inside its head. But Easley wanted to release the gar, so he and wildlife department officials took great care in the weighing and measuring of the fish before setting it free.

ODWC south central regional supervisor Matt Mauck said the fact such a large fish was pulled from the lake is a positive sign – the lake and river tributaries have experienced low levels in recent years because of drought, making it hard for alligator gar to spawn. But this year, it appears water levels are up and biologists are predicting good recruitment.

“While the lake isn’t high, it has come back up some, and in some ways it is like high water with vegetation that has grown while the lake was down,” Mauck said. “We envision this will be a good spawning opportunity for them this year.”