Photo by Steve Slater, Flickr.com Residents in villages throughout the country of Botswana are looking for a solution to a... 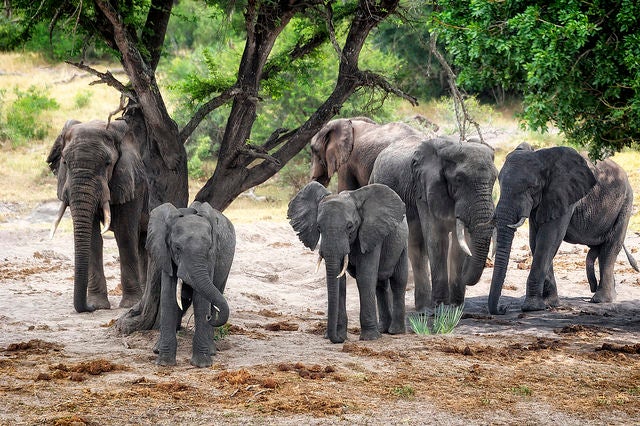 Residents in villages throughout the country of Botswana are looking for a solution to a growing problem with marauding elephants damaging crops and other property after the government outlawed most types of hunting last year.

Botswana is reportedly home to a third of all African elephants, and according to a story from Business Insider, some areas benefited from a hunting program where a certain number of licenses were sold to hunters. Hunters reduced the number of crop-destroying pachyderms, and at the same time, infused thousands of dollars of revenue into small communities wherever they traveled.

However, in 2014, the Botswana government imposed a ban on most forms of hunting, including the hunting of elephants, to slow the decline of springbok and other species suffering from habitat loss and illegal hunting. Since then, villagers have been looking for ways to protect their crops and replace the lost tourism income.

“All the years when elephants were hunted, it was not like this,” Minsozie, 35, a mother of seven children said. “The first time I saw the damage, I was shattered. I thought, ‘The elephants have eaten it all, life’s not good anymore.’ As soon as we plant, the elephants take our crops. Last year we could get enough food from our field. Now that’s devastated. We don’t know what to do.”

While hunting for elephants isn’t viewed worldwide with much esteem, (especially after King Juan Carlos of Spain hunted in Botswana in 2012 during an economic crisis) there is a movement in the country to see something done about the problem, even if it means allowing hunting again.

“Hunting of elephants can be used as a way of sustainably generating revenue for elephant conservation,” said Julian Blanc, from the Convention of International Trade in Endangered Species (CITES). “In many places, tourism doesn’t quite work. . .so hunting is an option available to all governments, and many of them use it quite successfully, as Botswana did for quite a few years.”

Those that oppose elephant hunting say there are more than enough animals already being targeted by poachers supplying the Asian market with ivory products and they’d rather see Botswana as a place where elephants find refuge. But Amos Mabuku, chairman of the Chobe enclave conservation trust, says that’s a troubling notion considering the elephant’s growing presence around the country’s small villages.

“The attitude of local people has changed, it’s becoming negative,” he said. “We used to tell the community, ‘conserve elephants,’ so that you get profit. But now why conserve?”