Robert Hawkins knew the muskie was big when it hit his fly. It wasn’t until the fish, having come from... 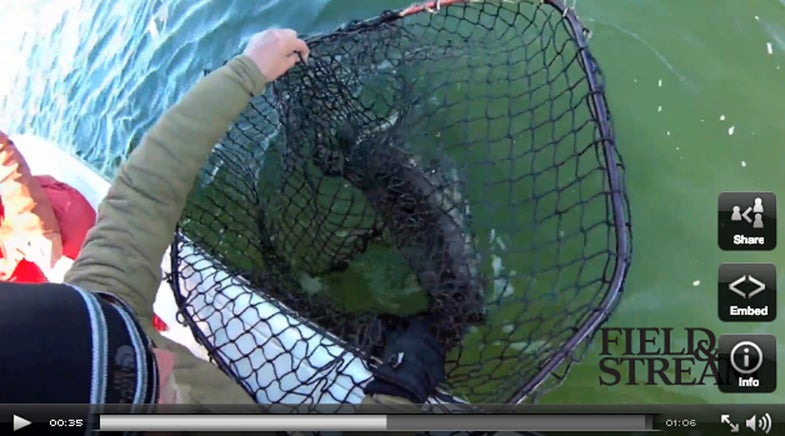 Robert Hawkins knew the muskie was big when it hit his fly. It wasn’t until the fish, having come from straight on, turned broadside, though, that he realized just how large it was. Hawkins, who owns Bob Mitchell’s Fly Shop, in Lake Elmo, Minn., and his two friends had been flyfishing on Mille Lacs Lake, a hundred miles north of Minneapolis, for four hours on Monday morning when the muskie chased and ate his bucktail streamer two feet from the surface. “I knew it was essential to keep constant pressure on the line,” Hawkins says. “Big muskies like that usually have one big run in them—but she just made seven or so big head shakes and that was it.”

Hawkins—using a custom 10-foot, 13-weight rod; 30-foot sink-tip line; and 40-pound wire—then managed to turn the fish toward the boat, and after a short fight, a buddy netted it. Then, as seen in the above video, exclusive to Field & Stream, the three men erupted in celebration.

The fish measured 57 inches long, with a 26.5-inch girth, and weighed more than 50 pounds. Muskie records are highly contested, but at that size, Hawkins’s catch has a good chance of claiming the fly world record. Hawkins, however, is unsure whether he’ll go through the process of officially submitting it to a records organization. “But it has to be the biggest muskie that’s been caught on the fly,” Hawkins says. “I don’t know of one that’s bigger.” The Fresh Water Fishing Hall of Fame & Museum currently lists a 51.2-inch muskie caught by Brad Bohen as the flyfishing world record.

Hawkins says that the key to landing a huge muskie is excellent streamer movement. “You’re looking to turn the fly 90 degrees with each strip,” he says. “Then to turn it 90 degrees the other way on the next one.”

After photographing the fish, Hawkins released it back into the lake. He and his two friends, Ben Olsen and Gabe Schubert, then spent the next several hours on the boat in near silence, reflecting on what had happened. “It was just unreal,” Hawkins says.