Firefighters and a game warden in Skowhegan, Maine, teamed up to rescue a whitetail doe that had fallen through thin... 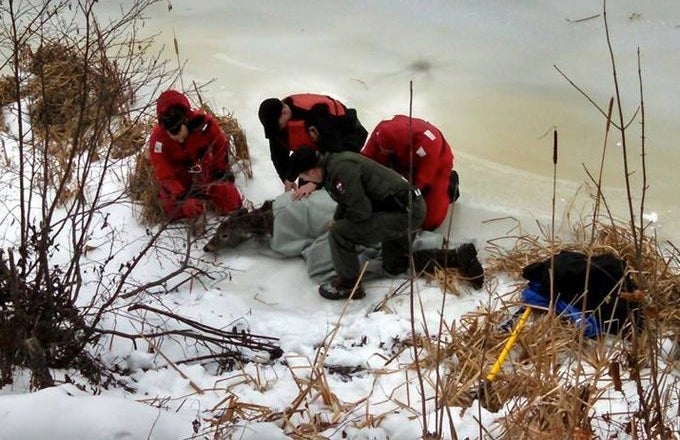 Firefighters and a game warden in Skowhegan, Maine, teamed up to rescue a whitetail doe that had fallen through thin ice into the frigid Kennebec River last week. Warden Chad Robinson was first on the scene, where the deer was 600 feet from shore, trapped in an 8- to 10-foot circle of open water, and unable to scramble back onto the ice. He contacted the fire department for assistance.

Two firefighters wearing cold-water flotation rescue suits went across the ice and into the water and captured the deer with an animal rescue pole, according to the Portland Press Herald. They put the 120-pound deer on a rescue sled, which Robinson and two other firefighters hauled to safety using long ropes. “It had been out there a long time,” said Skowhegan Fire Chief Shawn Howard. “By the time we reached her, she was very exhausted.”

The 2-year-old doe was cold and weak, but responded to warming and massage. After 20 minutes the deer was able to walk on its own back into the woods.

Though it was his department’s first deer rescue through the ice—they’d pulled dogs out of the river before—Howard and his crew were happy to help, especially to prevent passersby from trying to save the deer themselves. “I’d rather have us do it than have some bystanders come along and risk their lives,” he said. “My advice is stay off the ice. River ice is dangerous all winter long.”