First Person in Pennsylvania Killed by Rattlesnake in 25 Years

File photo courtesy of Ed Schipul/Flickr A man camping with his girlfriend in Medix Run, Pennsylvania, earlier this month was... 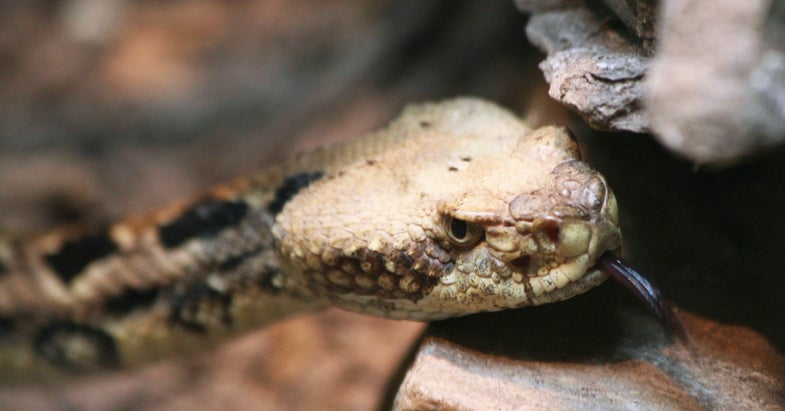 A man camping with his girlfriend in Medix Run, Pennsylvania, earlier this month was bitten by a rattlesnake and eventually succumbed to the venom, becoming the first person to die from a rattlesnake bite in the state in 25 years.

According to the Pittsburgh Post-Gazette, 39-year-old Russell Davis was at his family’s camp, about 125 miles east of Pittsburgh, putting wood on a campfire late on a Saturday night, when the rattlesnake bit him. His girlfriend said he then ran into camp and told her to take him to the hospital.

En route, Davis began experiencing severe breathing problems, so his girlfriend stopped at a tavern for help. Paramedics arrived 30 minutes later, performed CPR, and took Davis to Penn Highlands Healthcare, where he received an anti-venom treatment, before traveling by helicopter to a hospital in Pittsburgh for additional treatment. However, during the flight, Davis went into full cardiac arrest and was pronounced dead early Sunday morning.

Rattlesnakes are common in Pennsylvania, though, according to the Centers for Disease Control and Prevention, only five of the 7,000 to 8,000 people bitten nationwide each year die as a result. Ray Bamrick, head reptile keeper for the Pittsburgh Zoo, says that if you’re bitten, lay down, position the wound below the level of your heart, and seek medical attention immediately. “Don’t use constriction bands or tourniquets,” he said. “Don’t cut the wound and try to suck out the venom. Notify EMS and get to a hospital.”