Louis Jordan, 37, made national news when he was rescued by the Coast Guard far off the Carolina coast on... 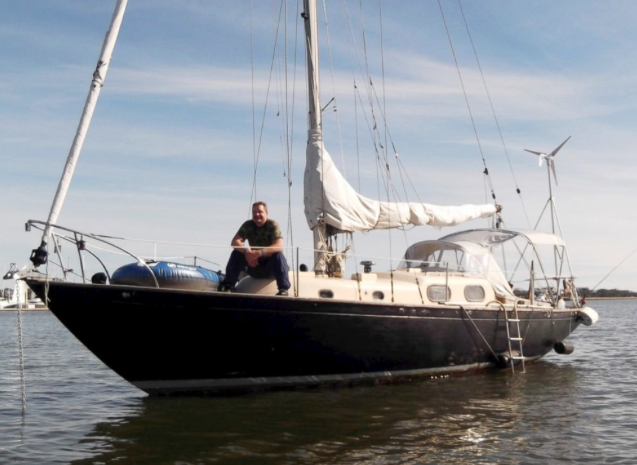 Louis Jordan, 37, made national news when he was rescued by the Coast Guard far off the Carolina coast on April 2, after 66 days at sea. He survived, he said, on prayer, pancakes, rainwater and fish he caught. Jordan had set out by himself in his sailboat from Bucksport Plantation Marina in Conway, South Carolina on January 23, planning to fish in the Gulf Stream out of his 35-foot sailboat, Angel.

Jordan never reached his fishing spot. The boat overturned in heavy seas one night. Jordan was thrown out of bed, and claims to have broken his shoulder when he landed. Jordan lost his GPS and radio when the boat flipped, leaving him stranded and drifting. According to ABC News, the boat righted itself twice during the time Jordan was lost, so he was able to make two or three pancakes a day to sustain himself along with whatever fish he could catch.

Although he had no fishing tackle he was able to catch fish by using a shirt on a rope as a lure, then netting the fish that came near it. He picked small crabs out of seaweed and once tried a tiny bite of jellyfish, which left his tongue burning for a long time. He collected rainwater in a bucket and in a rubber raft. The water tasted “like coconut milk,” he said.

The Coast Guard had long since abandoned its search for Jordan’s boat when the crew of a German-flagged container ship spotted him 200 miles off the coast of North Carolina and rescued him. He was later taken off the ship by a Coast Guard helicopter and flown to the mainland.

Jordan survived the ordeal in such good health that some are skeptical of his story, according to the Washington Post. His broken shoulder, he claims, healed while he was at sea. “We were expecting worse with blisters and severe sunburn and dehydration,” noted Petty Officer 3rd Class Kyle McCollum, one of the crewmembers of the Jayhawk helicopter that took Jordan off the container ship.

Authorities checked Jordan’s bank accounts to make sure he hadn’t made any transactions during the time he claimed to be offshore. “We don’t have any reason to doubt him but nor can we confirm he spent all this time out there,” said an unnamed Coast Guard spokesman. “We are looking forward to learning more about what exactly happened. We are as keen as anyone to find out the truth.”