Photograph via FWC/Flickr Unknown numbers of Burmese pythons are wreaking havoc on the Florida Everglades by overfeeding on native wildlife.... 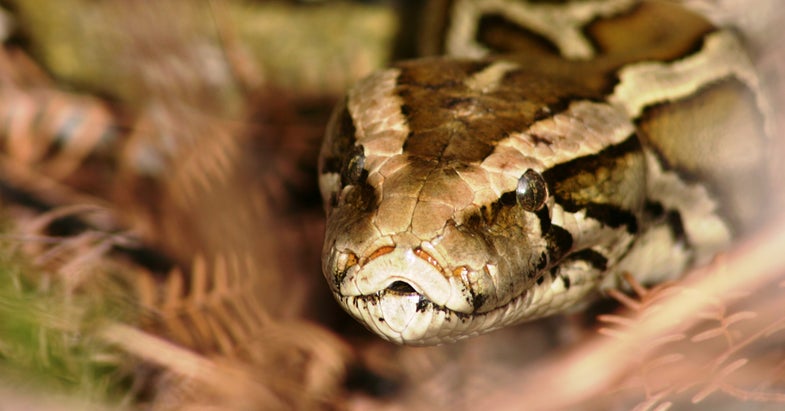 Unknown numbers of Burmese pythons are wreaking havoc on the Florida Everglades by overfeeding on native wildlife. Because of this, the state has expanded this year’s Python Challenge, which allows participants to hunt the serpents, into the previously off-limits Everglades National Park, as the Associated Press reports.

During the first public python hunt, in 2013, 1,600 participants managed to bring in only 68 pythons. Park superintendent Pedro Ramos said that he hoped the decision to expand the Python Challenge would allow more folks to receive proper training in python identification and capture, enabling them to hunt for the invasive predators year-round on park and state land. Among the native wildlife populations suffering the most are raccoons, opossums, whitetails, and bobcats.

Pet owners are believed to have introduced the invasive species, which can grow to 18 feet long and weigh more than 200 pounds, to Florida in the 1980s. The current python population is estimated to be anywhere between 5,000 and 150,000. Though pet owners are largely responsible for the python’s introduction into the wild, officials speculate that an estimated 4,000 might have escaped from a Miami breeding facility damaged by Hurricane Andrew, in 1992.

The Oxford American published an extensive (and entertaining) story about 2013’s Python Challenge, in which author Steve Featherstone writes:

Eradicating pythons from Florida is practically impossible. They can only be controlled. In 2010, [Florida’s Fish and Wildlife Conservation Commission (FWC)] banned sales of Burmese pythons and required pet owners to register their snakes, making Florida the only state where it’s easier to buy a Colt Python revolver than an actual python. The FWC also hosts amnesty days when people can turn in unwanted pythons, no questions asked, but no ban or amnesty program can address the pool of “illegal” pythons already circulating in the Everglades.

Registration for the hunt opens this fall. For more information visit pythonchallenge.org.