On May 14, Florida will celebrate Lionfish Awareness and Removal Day, kicking off a nearly five-month competition to remove as... 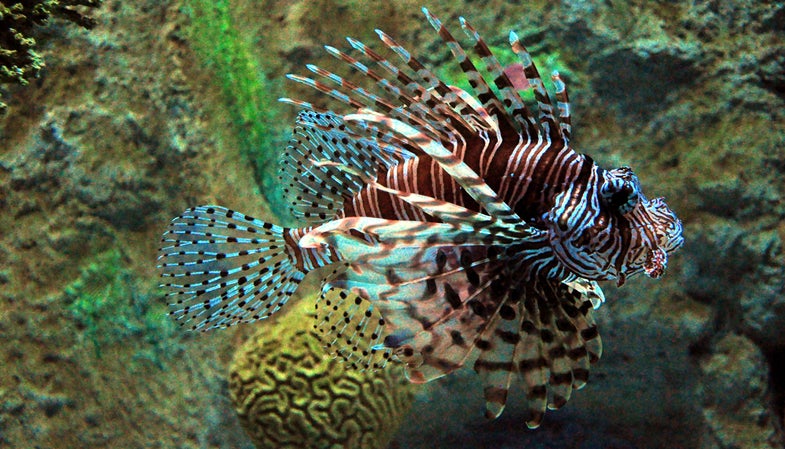 On May 14, Florida will celebrate Lionfish Awareness and Removal Day, kicking off a nearly five-month competition to remove as many of the invasive fish from coastal waters as possible. According to the St. Augustine Record, the Florida Fish and Wildlife Conservation Commission, which is sponsoring the event, will provide a number of incentives to encourage angler participation. Fishermen who bring at least 50 lionfish to official checking stations will qualify for the FWC’s Lionfish Hall of Fame; the angler who harvests the most will be named the Florida Lionfish King or Queen, and receive a lifetime fishing license.

According to the Advocate, FWC chairman Brian Yablonski says that innovative programs such as this are a great way to encourage involvement by rewarding the public for taking part in lionfish removal. “Those that remove lionfish not only get rewarded for their efforts, but they also get the experience of helping manage Florida’s fisheries,” Yablonski said. “In addition, involving Florida’s residents and visitors helps us gather better data to continuously evaluate and improve our approach to invasive species control.”

The FWC will provide further incentives in the Florida Panhandle via a pilot program that will give an additional state tag for either red grouper or cobia to anglers who harvest at least 100 lionfish by May 2017. The FWC has allocated 100 additional grouper tags, as well as 30 extra for cobia, for the event. Further, anglers who harvest 500 or more lionfish will have the opportunity to name an artificial reef.

According to Reef Rangers, a lionfish removal program sponsored by the FWC, the colorful fish has up to 18 venomous spines and consumes a variety of fish and invertebrates. Lionfish in the Atlantic and the Gulf of Mexico lack natural predators and can lay up to 30,000 eggs during spawning, factors which have contributed to their ubiquity. As a result, Florida has set neither a bag nor a size limit for lionfish. In fact, the only practical restriction limits spearfishing near public swimming areas. Because hook-and-line methods are not successful, typically, divers often employ spears, slings, or nets to capture lionfish.

The FWC uses similar incentive programs for other invasive species, including pythons. Earlier this year, 1,000 hunters took part in the month-long Python Challenge, a competition to raise awareness and help remove the species from the Everglades. The competition yielded 106 pythons, including one that measured more than 15 feet long. FWC commissioner Ron Bergeron called the event a success, saying it “educated members of the public about a large non-native snake that can impact our wildlife.”