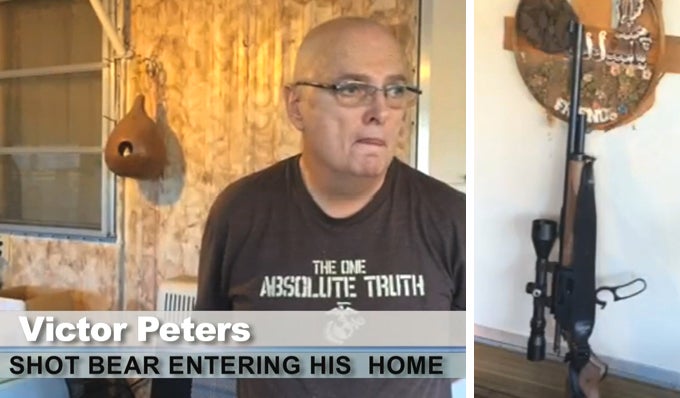 On October 22, a Florida man stood in his living room and fired a Marlin rifle loaded with a .45-70 cartridge at a black bear—estimated to be between 400 and 500 pounds, depending on the source—trying to enter his home. Killing a bear in Florida is illegal.

According to a story from WKMG, Victor Peters called 911 earlier that evening, because the bear had ripped out a set of windows on his screened-in porch and ate half a bag of dog food meant for his Rhodesian ridgeback. “It came in the same way it did last night. It ripped out a whole set of metal windows,” the man said. “He’s got to be 450 to 500 pounds. He’s huge.” The dog, consequently, was no help in scaring off the bear when it returned for more.

Though Peters shouted and tried to scare the bruin away, it reportedly kept trying to get inside and began showing signs of aggression. “He walked right through the shrubs, almost over them he was so big, and just climbed right in. He was two-thirds of the way in when I saw first saw him and I yelled and he just looked up at me and kept right on coming like he didn’t care I was there. And I don’t have any [other] way to stop him.”

He shot it and called 911, again, to report the fatal incident. “I cranked open the window in the living room and yelled at it and it just kept coming at me, showing teeth, so I shot it,” Peters said in a second call to authorities. “It’s dead on my porch.”

Peters said he didn’t touch the bear and wanted Florida Fish and Wildlife Conservation Commission officials to remove the carcass. “[The bear] is laying in the middle of my Florida room, bleeding all over. I shot him in the head,” he said. “I’ve seen a lot of black bears—I hunt—and I’ve never seen one this big.”

The NRA has contacted Peters with an offer to provide his defense if he is charged, the Orlando Sentinel reported. The 64-year-old has received a lot of media attention and, surprisingly, some earnest requests for some of the bear meat, which Peters does not get to keep, according to the FWC. “You can’t possess prohibited species’ parts by statute without a permit,” spokesman Greg Workman said in an email to the Sentinel. “This actually applies to many species. It would make enforcement impractical.”