A Florida man named Joshua James faces several criminal charges, including aggravated assault with a deadly weapon, after throwing an... 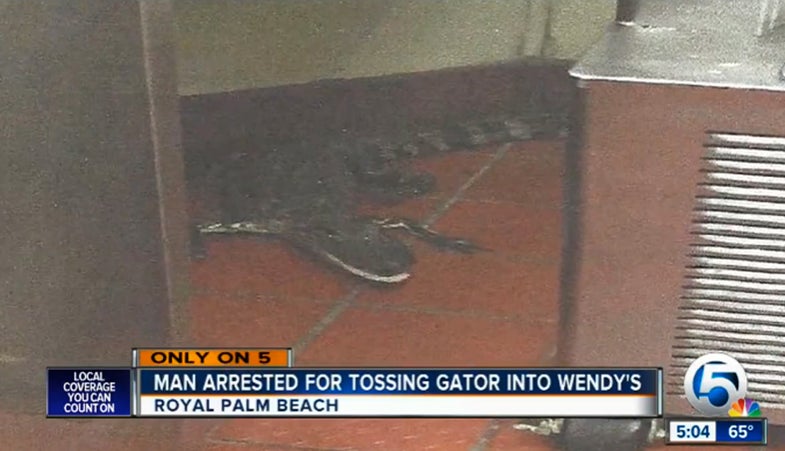 WPTV reports that the incident happened back in October, but it took investigators time to identify James in surveillance videos. Investigators say that James drove up to the Wendy’s window, accepted a drink he’d ordered, and then tossed the three-and-a-half-foot alligator inside the fast-food restaurant when the clerk turned her back to the window.

“[It was] just a stupid prank that he did that is now turning into this. It’s stupid,” Linda James, Joshua’s mother, told WPTV. “He’s a prankster. He does stuff like this because he thinks it’s funny.”

A judge didn’t think that the prank was funny, however. Today James appeared in court for the first time facing a biting list of charges, in addition to aggravated assault with a deadly weapon, including unlawful possession of an alligator and petty theft.

James claims that he found the alligator on the side of the road. When Florida Fish and Wildlife Conservation Commission officials found the gator in the Wendy’s, they captured it and then released it in an area canal.

According to the Palm Beach Post, prior to the gator toss, James’s record was clean, other than minor traffic violations. Bail is set at $6,000 with no rights to own weapons or animals, including reptiles. Unsurprisingly, James is also not allowed to dine at Wendy’s anymore.

Alligators are protected by U.S. Fish and Wildlife Service because of their similar appearance to threatened crocs.