Florida Teen Donates All of Her Fishing Tournament Winnings to Charity

When Chasten Whitfield was in elementary school, her hobbies were quite different from her friend’s. She was the only girl... 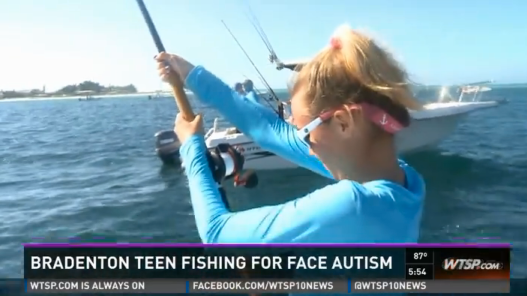 When Chasten Whitfield was in elementary school, her hobbies were quite different from her friend’s. She was the only girl in her school that fished and says it made her an easy target for bullies. Rather than listen to her critics, she used the experiences as fuel during competitive fishing events. But what really has people turning their heads is what she does after a victory.

A story from CBS affiliate WTSP reported that in the several years Whitfield has competed (and she’s won multiple tournaments) the south Florida teen says she has never kept a single penny of her winnings. Instead, she gives it all to charity.

“I fish with my heart. I’m like, ‘Oh dear God, please help me catch fish and help me win the tournament so the Face Autism kids get the money and help them get bigger,’” she said while reeling in a tarpon last Wednesday afternoon.

Aside from Face Autism, Whitfield also donates her money to other causes like the St. Jude’s Research Hospital, a Florida burn hospital, and the Prospect Riding Center—a facility that pairs therapy with recreational equine activities.

“It’s just a great feeling of helping other people,” she said.

Captain Nate Weissman has been fishing with Whitfield for years. He says she’s the real deal and doesn’t know anyone else who would willingly give away money.

“It’s really refreshing to see somebody so young with such a good heart doing all the right things for all the right reasons,” Weissman said.