Tucker Martin, a 17-year-old fisherman plying the Chipola River in northwest Florida earlier this month, hooked and landed a new... 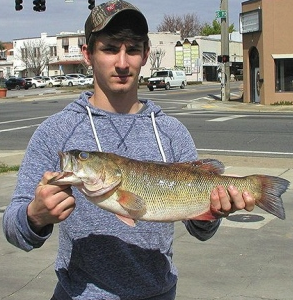 According to the Washington County News, Martin was fishing from the bank with his friend on March 8th at around 5 p.m. when he cast a spinner bait under a bridge and initially thought he hooked a spotted or largemouth bass.

He and his grandfather, Edgar, met with Florida Fish and Wildlife Conservation Commission (FWC) regional biologist Chris Paxton at a nearby market to have the fish species verified and weigh it on certified scales. When it was all said and done, Martin’s shoal bass beat out the previous state record by 6 ounces.

Shoal bass are one of five other black bass species native to Florida—the other four being largemouth, Choctaw, spotted and Suwanee bass, though none are as widespread, or grow as large, as largemouth bass. Because of that fact, the FWC is considering new rules to help foster populations of the lesser bass species and soliciting public input for the new rules, which would go into effect in July, 2016.

“Whereas central Florida is especially renowned for trophy largemouth, the Florida Panhandle has numerous species of uniquely evolved black bass that we are proud to promote and manage,” Paxton said. “It was a delight getting to document another state record from this area.”