Photograph courtesy of Yellowstone National Park/Flickr Protecting cold-water trout may be as easy as tracking temperature. At least that’s what... 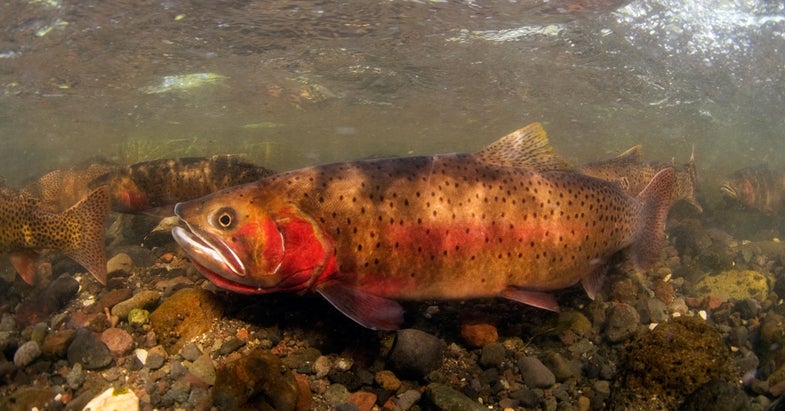 Protecting cold-water trout may be as easy as tracking temperature. At least that’s what a new five-state study called the Cold Water Climate Shield is hoping.

Associated Press reports that biologists with the U.S. Forest Service have identified streams in Oregon, Washington, Montana, Idaho, and Wyoming that could support native cutthroat and bull trout if the unusually high temperatures of the past few years persist out West. Research shows that water temperatures in the region have increased by about a degree over the past three decades, with significant negative effects on indigenous fish.

The new study maps “cold-water refuges”—streams that cutthroats and bulls favor but non-native browns and brookies find too cold, thus creating a natural barrier between the species.

“One of the things we’re seeing is that the colder areas are typically in the headwaters. Those are warming up a lot more slowly than streams at lower elevations,” says Dan Isaak, a fisheries biologist with the U.S. Forest Service. “Rather than spending money to build artificial barriers on streams to prevent the upstream advance of invasive species (which is expensive and commonly done in some areas), the climate refuge streams we’re highlighting are so cold that you wouldn’t need to build a barrier to preserve the native community.”

According to Trout Unlimited’s State of the Trout report non-native species, such as brown trout, pose a substantial threat to native Western trout, as well.

“Native trout in the United States are in big trouble,” says Chris Wood, Trout Unlimited president and CEO. “Of the 28 species that historically occurred in our waters, three have already become extinct.”

For the study, the Forest Service glued 4,000 sensors, which record water temperature hourly for a year, to rocks on river bottoms. About 16,000 other sensors collected additional data and DNA sampling that also factored into the research.