In British Columbia’s Fraser River, the worst return of sockeye salmon in over one hundred years has shut down the... 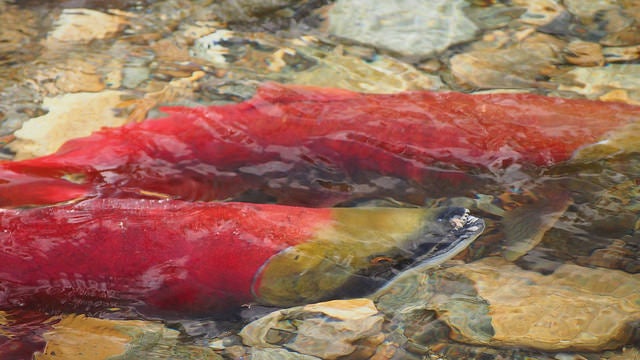 In British Columbia’s Fraser River, the worst return of sockeye salmon in over one hundred years has shut down the commercial fishery and diminished aboriginal fishing, New Delta Reporter reports. The run size estimates of returning sockeye is 853,000, the lowest since 1893. Under 2.3 million sockeye were projected to return by Fisheries and Oceans Canada, already a very low number for a river bearing a robust fishing legacy.

Mike Lapointe, chief biologist for the Pacific Salmon Commission, said that number is not surprising to experts. He added that he doesn’t agree with characterizing the low numbers as disastrous, since, he told BCLocalNews, “it’s the cycle year that typically has the smallest return.” He attributes the loss to a warm “blob” of ocean water that peaked in 2013 and ’14 in the Gulf of Alaska, reducing food supply and attracting predators.

The sockeye now heading into the Fraser were spawned by a run of 2.05 million sockeye in 2012. To contrast, an Adams River run in 2013 brought a return of 30 million salmon. Although Lapointe doesn’t see this as dire, it’s still very disappointing for local fishermen, such as Pete Granger, who told the Bellingham Herald that if the numbers don’t improve in the next couple of weeks, the season will be lost.