French Couples Sacrifices Themselves, Saves Son From Dehydrating in Desert 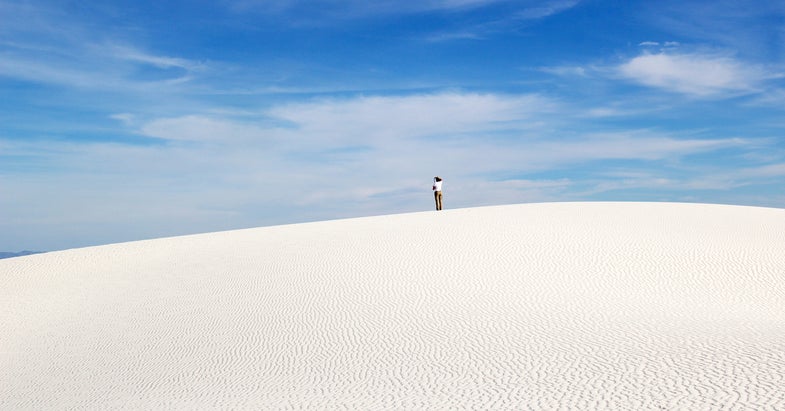 As CNN reports, earlier this month a French couple visiting New Mexico’s White Sands National Monument died while on a hiking trail. The sheriff’s department believes the deaths are a result of the heat, as temperatures at the White Sands reached higher than 100 degrees during the family’s time at the park.

On the first day of their excursion, Ornella Steiner, 51, and David Steiner, 42, of Bourgogne, France, and their 9-year-old son set out on the 4.6 mile Alkali Flat Trail at noon, with two 20-ounce bottles of water among them—well short of the gallon-per-person per-day recommended by the Park Service. Likewise, park officials suggest not hiking in temperatures higher than 85 degrees in the treeless, 275-square-mile park. The high temperatures were normal for August, though, according to park superintendent Marie Sauter, who told CNN News: “There is no shade. There is no cover. You are out exposed to the sun, the wind, the heat, and the reflection of the sun off the white sand. It’s a harsh desert environment.”

About a mile into the hike, the family strayed from the trail, possibly falling down a sand dune. Shortly after, David, the father, and the boy separated from Ornella, who had turned and tried to walk back to their vehicle, as a previous knee injury was bothering her. She never made it, though, and officials discovered her body around 5 p.m. that evening.

The boy, suffering from dehydration, was found alive with his father’s remains about 45 minutes after Ornella was discovered. From what the boy told officials, his parents gave him two sips of water for every sip they took, an act that likely saved his life at the expense of their own. “He wasn’t crying,” said Otero Sheriff Benny House, “but he was dehydrated and, of course, he was upset. I just think [the Steiners] underestimated the desert.”

The boy’s grandmother flew from France to New Mexico to take him home.