Fundraiser Held to Save the Carrie Deer

Photo by Larry Roberts/Post-Gazette A fundraising effort to save the Carrie Deer kicked off on August 16 with a screening... 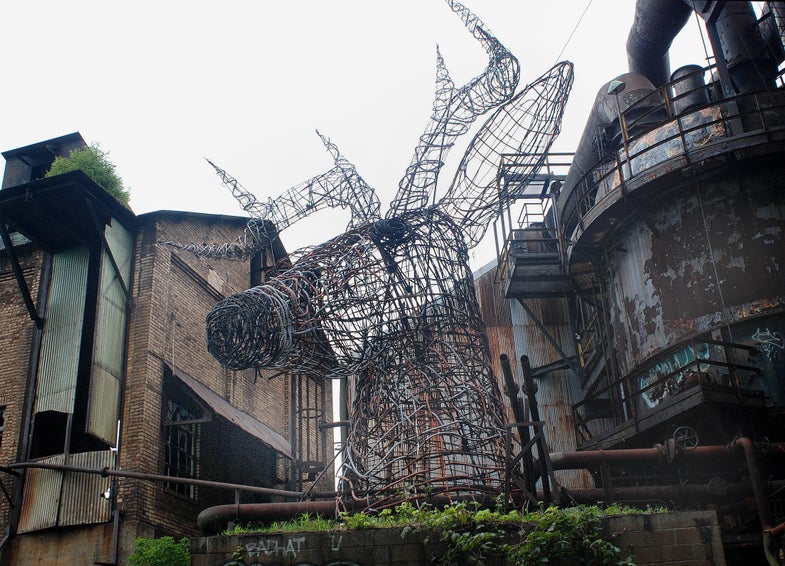 A fundraising effort to save the Carrie Deer kicked off on August 16 with a screening of a documentary about the locally beloved piece of guerilla art. The huge sculpture of a whitetail buck’s head was built in 1997 near Rankin and Swissvale, Pennsylvania, by a group of artists who snuck into the site of the abandoned Carrie Furnaces. The group picked a deer head as their subject to represent the way nature was reclaiming the abandoned furnaces. Now, the Carrie Deer itself is in disrepair, and efforts are underway to preserve it.

As the Post-Gazette reports, the artists who built the 45’x35′ statue never expected it to last, but 17 years later the deer has become a focal point to visitors to the Carrie Furnaces, which have since been designated a National Historic Landmark as part of the Rivers of Steel National Heritage Area near Pittsburg. The furnaces, once part of the U.S. Steel Homestead plant, have become a popular attraction. Some of the guides who give tours of the site worked there before it was closed in 1983.

The statue was built entirely by hand, without the aid of electricity, by a group of artists who snuck through a hole in the fence every Sunday for a year. Hiding from security guards, they salvaged pieces of steel tubing, copper ties and wire from electrical conduit salvaged from inside the buildings to construct the sculpture. Its pieces are held together with twisted metal and chain, and it was hoisted to its place on top of a pump house with a boat winch.

Today the pump house roof has rotted away underneath the sculpture, and rust and the weather have damaged the rest of the deer. The first goal is to raise $5000 to repair the deer’s vertical supports. Eventually the hope is to restore the statue and the building it stands on. Ron Baraff, Director of the Museums and Archives at Rivers of Steel Heritage Corporation, says “We want something that was done [17] years ago to last two, three, four generations.”