An enormous communal spiderweb at Lakeside Park, in Rowlett, Texas, has recently attracted lots of attention and even more insects.... 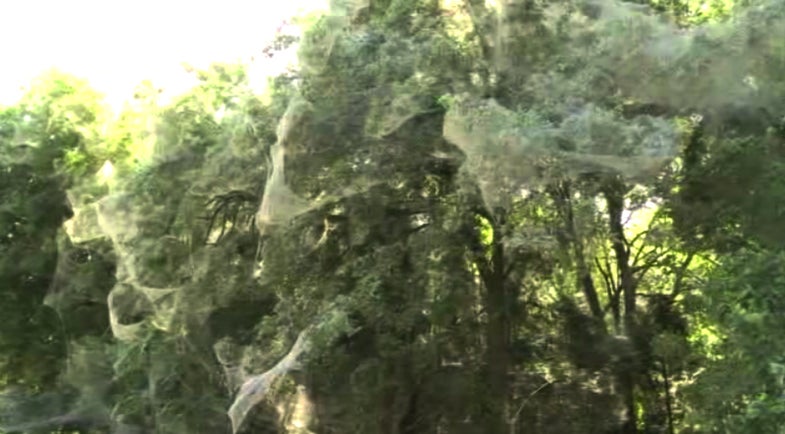 An enormous communal spiderweb at Lakeside Park, in Rowlett, Texas, has recently attracted lots of attention and even more insects. As ABC affiliate WFAA reports, the web, made by thousands of spiders, is a rare phenomenon that typically occurs when there is an abundance of insect prey in an area. In this instance, the web is near a lake where large midge and mosquito hatches may have prompted the spiders to band together to build the giant trap.

The webs extend up to 40 feet in the air, wrapping entire trees, and stretches hundreds of feet long. Although the exact species of spider hasn’t yet been determined, it’s a type of long-jawed spider, which are harmless and non-aggressive toward humans and also toward others of its species, a rare trait among spiders.

The last-known communal web in Texas was built in 2007, at Lake Tawakoni Start Park, about 35 miles east of Rowlett. In that instance, the web was built by Guatemalan long-jawed spiders. That nest drew interest worldwide but once gone, the spiders never rebuilt it.

It’s hard to capture the scope of the web in a single photo. See the video below for a detailed look at the spiders’ work.