In Arizona and New Mexico, efforts to restore Gila trout—a once-endangered and still-fragile species—have been successful in 62 miles of... 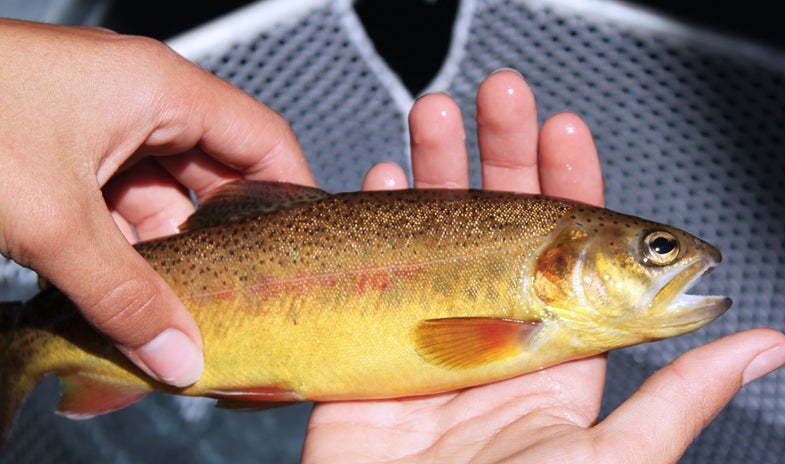 In Arizona and New Mexico, efforts to restore Gila trout—a once-endangered and still-fragile species—have been successful in 62 miles of stream. Now, the Albuquerque Journal reports, the New Mexico Department of Game and Fish, the U.S. Forest Service, and U.S. Fish and Wildlife Service plan to extend this range by restoring Gilas to 24 miles of the Gila National Forest’s Whitewater Creek. The stocking in Whitewater Creek will put the restoration effort halfway to its goal of reviving Gila populations in 168 miles of stream in New Mexico and Arizona.

Gila trout are native to the Gila River and its headwaters in New Mexico, as well as to Arizona’s Verde and Agua Fria drainage systems. By 1950, however, its range was reduced to about 20 miles, and, in 1973, the species was placed on the Endangered Species List. Though activities such as logging and mining contributed to the degradation of the fish’s habitat, competition with non-native species also played a role in its decline. Hybridization with stocked rainbow trout, in particular, led to a drastic reduction in the Gila population.

Moreover, wildfires in 2013 respectively burned 300,000 and 138,000 acres of the Gila Wilderness. “Eleven out of the seventeen populations of Gila trout were within the burn areas of those two fires,” Jill Wick, a trout biologist with the New Mexico Department of Game and Fish, told the Albuquerque Journal. “We lost eight of those populations.” Fortunately, rescue teams were able to transport a number of trout to hatcheries before rains flushed deadly ash into the streams and killed even more of the fish.

The fires of 2013 did have one benefit, though: They eliminated many of the species competing with Gilas and opened the door for the current restoration efforts, such as those at Whitewater Creek. Still, because of the chance for hybridization, Gilas cannot be restored to streams with non-native fish. Wick said this is because if Gilas were to hybridize with rainbow trout, then their offspring would not be true Gila trout, thus detracting from the efforts.

In New Mexico, a free permit allows anglers to fish for wild Gilas in two streams on a catch-and-release basis, but only single hooks on artificial lures may be used. There is, however, no permit required to fish for stocked Gilas. Arizona has closed all Gila trout recovery streams to anglers, though people may people fish for them in the Frye Mesa Reservoir, where they are stocked and legal to catch.