On a Sunday morning earlier this month, a grizzly bear met its end as it invaded the home of Niki... 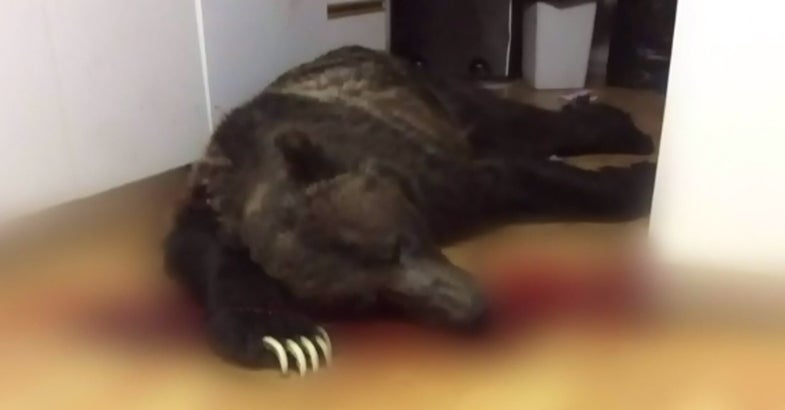 On a Sunday morning earlier this month, a grizzly bear met its end as it invaded the home of Niki Traverse and her family, of Kimberley, B.C.

Traverse told CTV News that she woke early that morning because her dog was barking hysterically in the kitchen. When she entered the kitchen looking for the dog, she came face to face with a grizzly, which had broken in and was eating a bag of cat food. “It was 10 feet from our son’s bedroom door,” she said. “I ran back into our bedroom to grab my husband and said, ‘There’s a bear in the house, there’s a bear in the house!'”

Niki’s husband, Mark, who’s a hunter, got his gun and headed into the kitchen. “It took a step toward me and I shot it,” he said. “It took another step and I shot it again.”

The resulting scene in the Traverse’s kitchen was a bloody mess. Local conservation officer Jared Connatty said that the couple did nothing to attract the bear, which likely entered through an open window, and noted that while roving black bears are common in B.C. and occasionally enter homes, grizzlies are unlikely to do the same. The fact that the bear (which Connatty estimated to be about 15 years old) that entered the Traverse’s kitchen was in poor health might have affected why it took a chance to get food.

“Its body fat was way lower than what it should have been at tis time of year,” Connatty said. “[It] had some hair missing all over the body which can be related to just poor health, which is why it’s resorting to these measures to gain its food resource.”

The Traverses credit their dog with saving their lives. The family and local officials are using the incident to remind neighbors to be cautious about sleeping with windows open and to ensure bear “attractants,” such as food and garbage, are sealed and stored where the animals can’t access them.

Watch an interview with the family below, and click here to see an unblurred photograph of the dead grizzly.