A Florida woman and her son credit their dachshund, Daisy, for saving them from a black bear one week ago.... 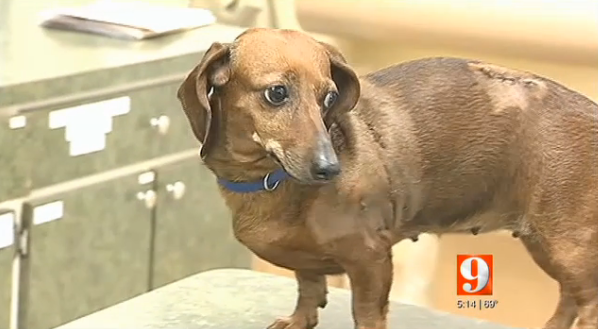 A Florida woman and her son credit their dachshund, Daisy, for saving them from a black bear one week ago. Krystal Long had just returned from the grocery store and was unloading her car when a black bear walked into the garage. “I started throwing things at it to get it to go away, because usually when you do that, they take off,” she told WFTV. “But this bear was different. It only enraged him and made him come closer.”

Hearing Long’s screams, her 6-year-old son, accompanied by Daisy, ran out to see what was wrong. The 15-pound dog immediately went for the bear, estimated at 200 pounds. The fight didn’t last long. “He had her pinned down with one paw and he was ripping into her,” Long said. Daisy was able to get away from the bear and hide under the car. Long took her son inside and came back out with a gun to rescue Daisy, but the bear was gone.

Daisy had several broken ribs and deep lacerations, but veterinarians say she’ll survive. A Gofundme account has been set up to help pay Daisy’s vet bills. So far, 193 people have donated more than $5,000. Apparently, people love an underdog.

The bear population continues to grow in Florida, and there are increasing conflicts within residential areas. In 2013, the state received 6,726 nuisance calls about bears.