Hunt Is On for Mountain Lion That Attacked Boy in California

Two game wardens and a tracker employed by the U.S. Department of Agriculture are searching for a mountain lion that... 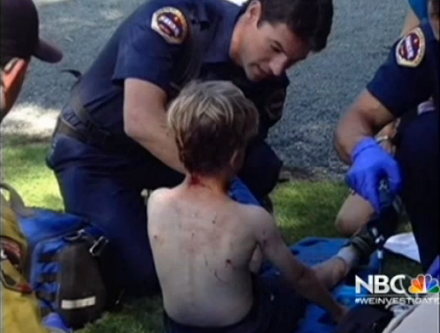 Two game wardens and a tracker employed by the U.S. Department of Agriculture are searching for a mountain lion that grabbed a six-year-old boy and dragged him into the brush on a California hiking trail on Sunday. The boy’s parents were able to fight off the lion and call for help, but not before the boy suffered lacerations on the neck, where the cat grabbed him.

Witnesses say he was bleeding heavily; one anonymous witness submitted a photo to the above NBC Bay Area news report. The victim was taken to Santa Clara Medical Center and returned home on Monday night.

The attack took place on a public hiking trail near a vineyard in the middle of the day. The trail has been closed off, and California Department of Fish and Wildlife Lt. Pat Foy told NBC Bay Area news that law enforcement officers began a search for the animal Sunday as “a matter of public safety.” Officials plan to take DNA samples from any lion they capture and check it for a match with lion saliva samples from the boy’s clothing. If there’s a match, the animal will be killed. They’ll also take samples from the animal’s brain to test for rabies.

Mountain lions are often sighted in California parks but attacks on humans are fairly rare. The last one occurred in 2012 near the Yuba River in Nevada County. Overall there have been 14 verified attacks between 1986 and the present day, according to the California Department of Fish and Wildlife. Mountain lion hunting was banned in California by a ballot initiative in 1990.

Foy says there is evidence that, even after the attack on the boy, “the lion actually followed the family back down to their car when they were trying to get the child to safety. That’s indicative of extreme, dangerous behavior.”