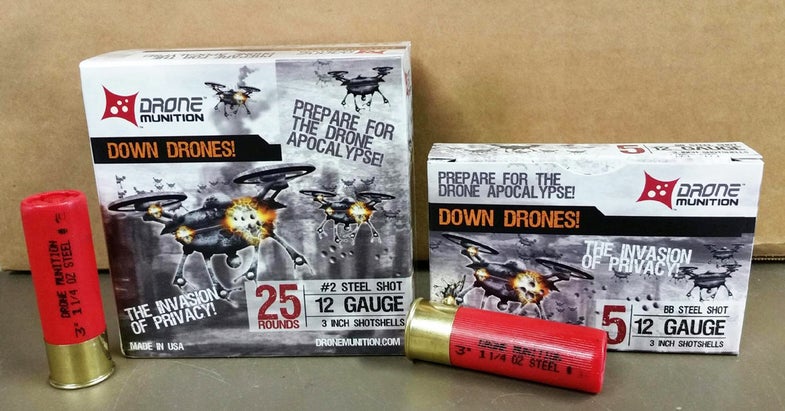 There’s no shortage of stories about hunters and anglers dropping (or trying to drop) pesky drones. In recent years, however, pilots have used drones to eavesdrop on private property, and animal-rights activists have used them to harass hunters in the field. Moreover, pilots have flown the crafts near commercial planes, and created custom gun-firing aircrafts, both of which pose serious public-safety concerns. Much of this has occurred because regulations on where drone owners can and can’t fly their aircraft, or what they’re allowed to capture with their surveillance equipment, aren’t clear, as Ammoland.com reports. Because of this, Drone Munition seeks to curb the safety and privacy concerns associated with drones.

“Drone Munition was created to provide defense against the danger caused when drones are misused,” Snake River’s website states. “Drone Munition is lead-free, safe for the environment, and provides a very high-quality load that will effectively disable a drone encroaching your property’s airspace. As a side note, the round also makes for a very high-end hunting load for ducks, geese, or turkeys.”

Snake River says that it also plans to offer a line of Drone Munition merchandise, such as T-shirts, targets, and hats featuring the brand.