Photograph via Larry Smith/Flickr Whitetails are having their way in Dalton Gardens, Idaho, and some locals are sick of it.... 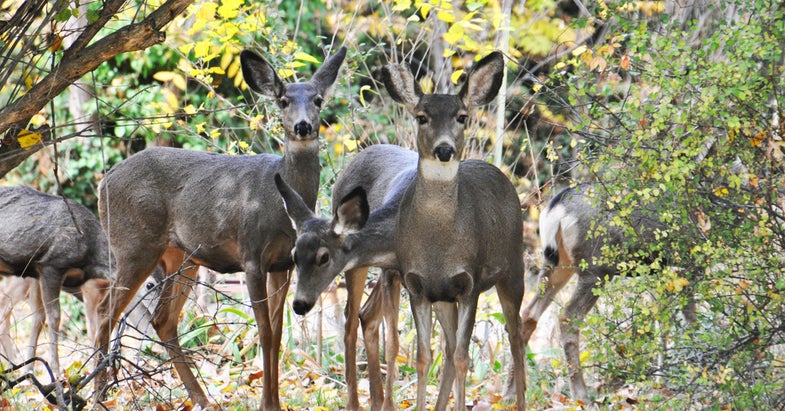 Whitetails are having their way in Dalton Gardens, Idaho, and some locals are sick of it. The Associated Press reports that city council is considering whether to use a birth-control vaccine, administered via dart gun, on the deer that now run through town. “We should have around 25 to 30 deer per square mile,” Steve Roberge, Dalton Gardens councilman, told the AP. “In Dalton, we estimate there are about 150 to 250 per square mile. And Dalton is only two square miles.”

According to Boise Weekly, the town banned the public from feeding deer a year ago. If caught, an offender faces a $100 fine—but no one has yet been fined. Also, the city hired a trapper to move 25 deer out of town, but the trapper managed to relocate only 10. In September, though, the Science and Conservation Center in Montana presented a sterilization program to the Dalton city council, offering a birth-control vaccine for $24 per .5 milliliter. The vaccine has to be given in two doses, plus an annual booster, which sterilizes deer for two years.

Birth control for wild animals is done in other parts of the country, but Roberge says that Dalton would be the first Idaho town to try it. According to the New York Times, tests of similar vaccines have reduced deer populations by 50 percent over five years, but Hastings-on-Hudson, New York—the first U.S. town to implement a free-range-deer-reduction vaccine program—reported that only 20 deer were darted in its program’s second year, yielding less-than-stellar results. The AP story does not mention whether officials in Dalton Gardens considered urban bowhunting—which has found some success—as an option for removing deer, but comments made by the public in a city survey did, in fact, include bowhunting.

Whether birth control will be used and how it may be given will be decided in 2016, when Roberge becomes mayor and other new city-council members take office.