The Kardashians may have built an empire by shaking their tailfeathers on camera, but we’re way more interested in watching... 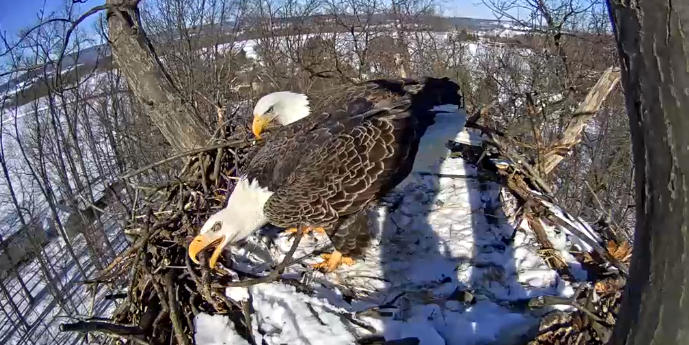 The Kardashians may have built an empire by shaking their tailfeathers on camera, but we’re way more interested in watching this pair of bald eagles build their nest on the Pennsylvania Game Commission’s “bald eagle nest cam.” A special section of the commission’s website has been dedicated to live-streaming footage of the activity inside the nest located near Cordorus State Park in Hanover, Pa.

Bald eagles have experienced a comeback over the last 30 years, thanks to dedicated conservation work for the species. According to the game commission, bald eagles now nest in 56 of the 67 counties across the state. This nesting couple has been busy rearranging sticks and other materials to create a comfortable spot for their egg since the camera went live on January 3. Officials made sure to install the camera long before an egg was expected.

“All in all, things already are looking good,” Game Commission Executive Director R. Matthew Hough told The Gant Daily. “The eagles have added a lot of new material to the nest, and they appear to be getting ready to lay an egg. It should really be something to see.”

This is the second year that the game commission has installed a bald eagle cam. The pilot program, which ran last year, had over 3 million viewers worldwide. This year’s setup is a significant upgrade from the pilot program, featuring a camera that captures high-definition footage that is also hard-wired to a power source, which should eliminate the live stream losing power due to a lack of solar charge.

To tune in to the live eagle cam or watch time-lapse videos from the previous weeks, click here.