Photograph via North Carolina Sportsman/Facebook This month a five-year-old North Carolina boy’s name was officially added to the International Game... 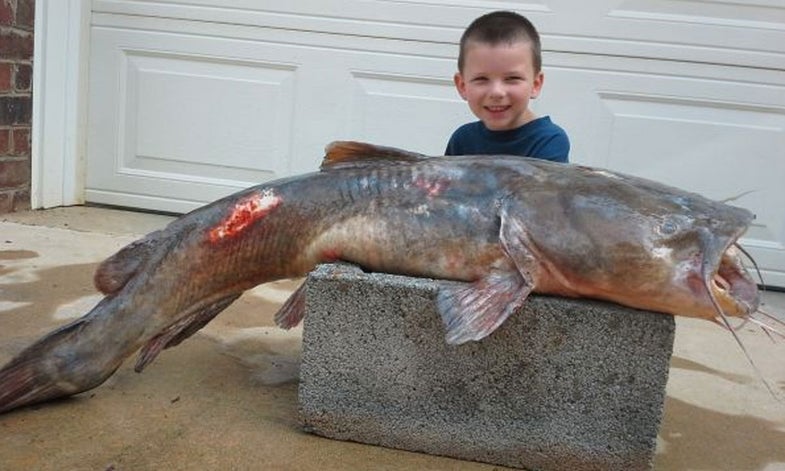 This month a five-year-old North Carolina boy’s name was officially added to the International Game Fish Association’s (IGFA) record book after he hooked, fought, and landed a 28-pound, 8-ounce flathead catfish back in July—besting the old record in the 50-pound line class by more than 10 pounds.

The boy’s father, Ricky Harvell, told North Carolina Sportsman that he and his son, Luke, reviewed the IGFA record book and noticed the entry in the 50-pound line class was less than 20 pounds—a mark the two thought they could beat. So they started fishing once a week, for three weeks straight, specifically with the record in mind.

“We had moved around a lot, fishing different places, and the place we caught him was our last spot,” Ricky said. “We were fishing close to the Highway 8 ramp, about halfway between the ramp and the bridge. We were there about 30 minutes before he bit.”

Using gear Ricky prepared specifically for the affair, young Luke hooked the record flathead on a live bream and fought it for nearly 7 minutes.

For Ricky, the excitement of watching his son battle what he knew might be a record-breaking fish was almost more than he could stand, he said. However, he forced himself to stay behind the camera and film the entire scene, making sure he didn’t assist his son, per IGFA rules. “He was struggling because the drag was set too tight,” Ricky said. “At one point, he was telling me that his back hurt, but I couldn’t touch the rod and help him.”

Once Luke and his father managed to get the 40 ½-inch-long fish into the boat, they took several photos, weighed the fish on certified scales, and completed all the necessary steps required by the IGFA to certify a record.

Now after landing the monster flathead, Luke dreams of someday fishing in the Bassmaster Classic, but until that day comes, he plans to try beating his father’s personal record—a flathead weighing than 40 pounds.