A grass carp has been caught on the Canadian side of Lake Erie, according to the Windsor Star. Grass carp—part... 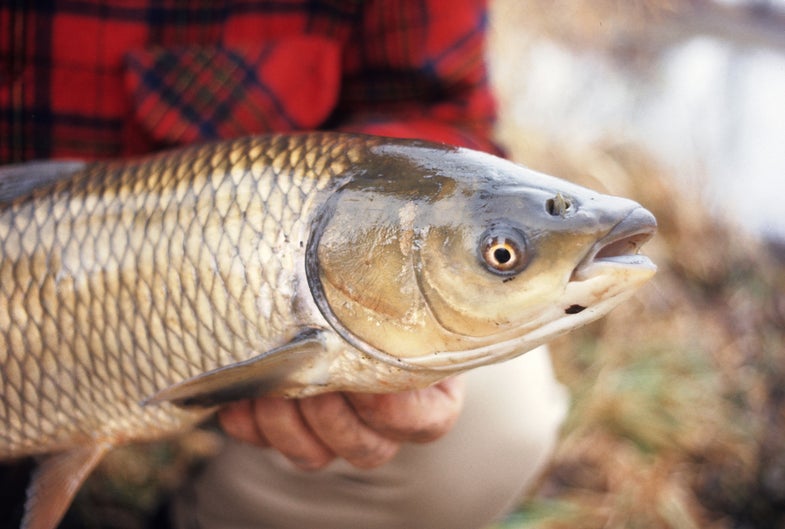 Grass carp, such as this, are invasive and can wreack havoc on an ecosystem.. WDNR/Flickr
SHARE

A grass carp has been caught on the Canadian side of Lake Erie, according to the Windsor Star. Grass carp—part of the Asian carp family—have previously been found in Lake Erie, so the discovery has only further concerned officials. Currently, efforts are focused on determining whether the fish was sterile or fertile, and part of a reproducing population in the lake.

“We are looking to determine whether there might be a population forming or if it was an individual fish released by someone,” Jolanta Kowalski, a spokeswoman for Canada’s Ministry of Natural Resources and Forestry, told the Star. She went on to encourage anglers to report any future encounters with grass carp.

Earlier this year, Holly Embke, a graduate student at the University of Toledo, collected eight grass carp eggs in the Sandusky River, a tributary of Lake Erie. Embke’s discovery was the first to confirm a reproductively viable population of grass carp in the Great Lakes.

“We actually thought the Asian carp was confined,” biologist Michel Legault told CBC in June, upon the discovery of a grass carp in the St. Lawrence River. “But we know that in recent years the grass carp has been found in a small section of Lake Erie. And last summer, nine grass carp were caught in the Toronto area.”

Concerning this most recent discovery, Kowalski add: “I believe there will be some monitoring, but we are not sure what that will look like right now,”