Last month, Nate Napolitano, a 14-year old angler from Virginia, was on a walk with his mother around Lake Lawson,... 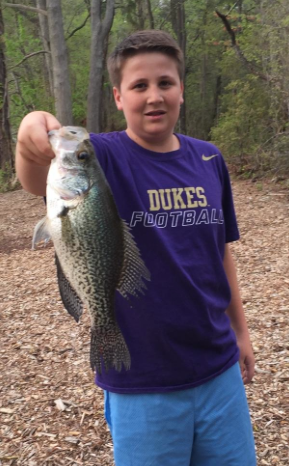 Last month, Nate Napolitano, a 14-year old angler from Virginia, was on a walk with his mother around Lake Lawson, intermittently casting a small, plastic worm to see what he could catch, when he unknowingly hooked and landed a potential record-sized crappie.

A story from The Virginian-Pilot says Napolitano put a tape to the fish, likely a white crappie, and told his father it measured between 20 and 21 inches. A fish that long and possibly filled with roe had the potential to weigh nearly four pounds.

“I didn’t know what it was until I saw it, but I didn’t realize what a big one it was,” Napolitano said. “I just thought it was a normal fish. Then we looked online and I was like, ‘Dang, this thing is really big.’”

While it’s doubtful his fish would have broken the International Game Fish Association’s record for the species, Napolitano might have qualified for a record in the junior division or a catch-and-release record where the current length to beat is 14 ½ inches. Rather than regret his decision to let the fish go, Napolitano says he’s happy knowing he caught such a trophy.

“It’s just, like, relaxing for me,” he said. “When I catch one it’s like observing nature. I’ll keep some saltwater fish, but I release all the freshwater fish. I just like to fish and don’t want to kill them. I like other sports, but fishing is my go-to thing.”