Tootsie the chocolate lab usually spends her days chasing dolphins in the waters off of Crystal Beach in Florida. Infamous... 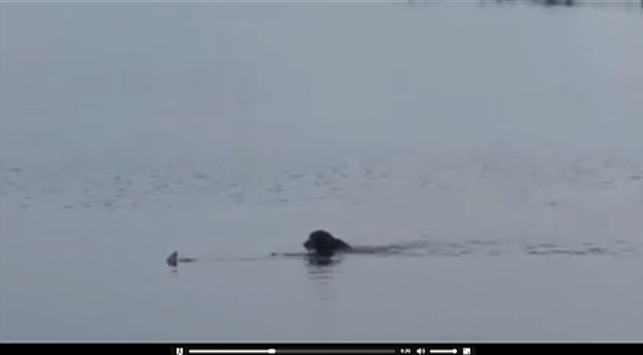 Tootsie the chocolate lab usually spends her days chasing dolphins in the waters off of Crystal Beach in Florida. Infamous among the locals, Tootsie shocked beachgoers last week when she took off after a shark swimming by the Pinellas County pier, despite owner Karin McArdle’s desperate cries for her to come out of the water.

“She just showed no fear, and was not listening, and she’s normally very obedient,” McArdle told Bay News 9. “I thought, ‘oh my God, my dog’s going to be gone, going to be fish fodder, shark bait!'”

Frightened beachgoers were certain Tootsie was a goner as they watched her swim closer to the shark. Parents told their kids to look away, but a bystander filmed the entire adventure, which ended positively. The shark did not appear to be bothered by Tootsie’s presence and soon swam off.

“She went up to the tail of that shark, sniffed it, said ‘ok,’ turned around and that shark just swam on,” said McArdle.

Bystanders recommended Tootsie’s name be changed to “Lucky,” but McArdle just hopes that Tootsie’s curiosity is sated and that the dog will not add chasing sharks to her regular activities.