Photograph via WCBS A New Jersey man named Robert Ehling and the state’s Division of Fish and Widlife (NJFW) are... 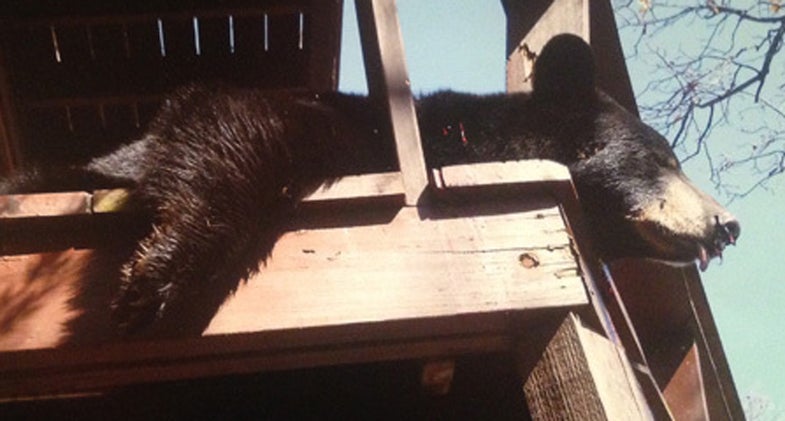 A New Jersey man named Robert Ehling and the state’s Division of Fish and Widlife (NJFW) are in a legal wrangle after Ehling shot and killed three black bears with a shotgun in October of last year. Ehling said that he was simply defending his home and himself. The state, however, claims that he was hunting and issued him citations for doing so. Later this month, the two sides will finally have an opportunity to present their cases in court.

According to CBS affiliate WCBS in New York, Ehling heard his wife screaming in their kitchen early one morning, and upon investigating, he discovered a 300-pound black bear trying to get a bag of birdseed inside the home. “It stood up and looked at me, and it got a little distracted,” he said. “It turned its head, and I shot it. I put another shot in him right behind his shoulder.”

The bear fell over the railing of Ehlring’s deck. When Ehling went to make sure it was dead, he saw another bear climbing up the deck, so he shot it, too. And as if on cue, a third bear that Ehling hadn’t seen began roaring at him, so he fired and killed it as well. “I hit it right in the head—it went down fast,” he said.

NJFW officials investigated the scene, but, unfortunately for Ehlring, they didn’t see the situation as clear cut as he did, and issued him four summonses for hunting out of season and for hunting near a residential home. Ehlring believes that he was defending his family, so rather than pay the $100 fine each violation carries, he’s fighting the citations in court. “I wasn’t hunting,” he said. “It was going to come into my house. That was a big animal—you’ll see the pictures.”

The New Jersey Department of Environmental Protection said that it can’t comment on Ehlring’s open case, but noted that people should call the police if they encounter an animal on their property.