In May powerful rainstorms swarming over Texas caused the Trinity River in Dallas to overflow and swamp the city. While... 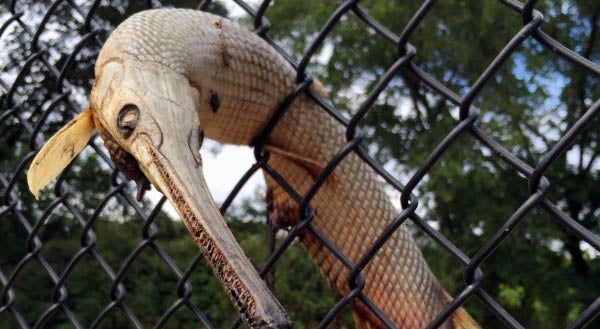 In May powerful rainstorms swarming over Texas caused the Trinity River in Dallas to overflow and swamp the city. While the receding water deposited tons of mud and debris on the city’s streets and parks, it also left behind some longnose gar in a most unusual way.

In a report posted to National Geographic‘s Explorers Journal, Andrés Ruzo says he was inspecting flood damage when he found several dead fish stuck in a fence. It’s not everyday someone sees a longnose gar up close, let alone several dead fish wedged between the chain links, so he photographed a few of the fish and posted the images online.

“A number of juvenile longnose gar were stuck in the fences near the Trinity, likely trying to return to the main river after feeding in the flooded areas,” Ruzo writes. “It was a bittersweet sight, as their untimely death allowed me to observe their impressive, armor-like scales and mouths full of sharp teeth. Certain Native American groups used gar scales as arrowheads and even as protective breastplates.”

Ruzo goes on to say that while these prehistoric-looking fish were once killed indiscriminately, there’s an increasing movement to protect gar and rebuild populations in waters where they’re struggling.