Loose Tiger Caught With a Weed Whacker and Tarp

Photograph via Andy Didorosi/Facebook In what can only be described as an odd series of events, a tiger was recently... 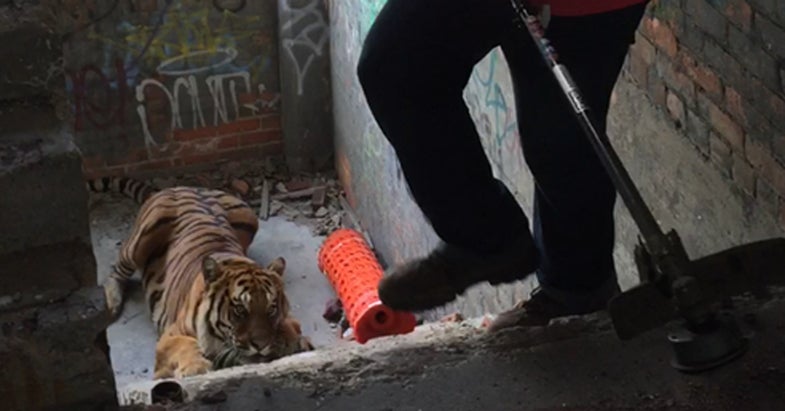 In what can only be described as an odd series of events, a tiger was recently on the loose in an abandoned automobile factory in northeastern Detroit, Michigan, but it was eventually coerced back into captivity by the irritating sounds of garden-and-lawn equipment, as the Detroit Free Press reports.

An article from Gizmodo notes that British photographer David Yarrow reserved two days at the deserted Packard Auto Plant for a photo shoot. Yarrow failed to mention to the plant’s staff, however, that part of his entourage included two wolves, a bobcat, and a tiger. About an hour into the photo shoot, the staff gave Yarrow, the animals, and their trainers the boot, but not before the tiger managed to escape up a staircase. It eventually meandered up to the fourth floor and decided it didn’t want to leave. Unsure how to pressure the big animal back to a more controlled area, one of the people working with Yarrow called a friend, Andy Didorosi, for help.

“My buddy who’s working the shoot calls up and is like, ‘Man, you got a leaf blower?’ No, but I do have a weed whip, so I came over with that and a few other tools,’” Didorosi said. “I thought it was going to be like no big deal, I’d drop the tools off and the handlers would handle it. Then they told me to walk down this way, and I turned a corner and he’s like eight feet away!”

Rather than run, Didorosi began filming the incident with his smartphone, and later posted the footage to Facebook. The video, which has since gone viral, shows a man using lawn-and-garden tools to “spook” the tiger into a tarp trap.

“We did that tarp, that didn’t work,” Didorosi said. “So then we tried a battery-powered hedge trimmer because that’s kinda loud. That didn’t work. And then we went down with a weed whip, the loudest thing we’ve got, and the tiger swiped at it! That didn’t work. The handler told us to retreat because the tiger was getting angry, so we backed away real slow. Then they got it back in the truck somehow, I think they tranq’d it.”

The tiger’s handlers, Animals of Montana, dispute the incident and say that the reports are an example of “social media out of control.”

According to the Detroit Free Press, neither the Packard Plant nor city officials were made aware of the tiger’s presence before the photo shoot took place.