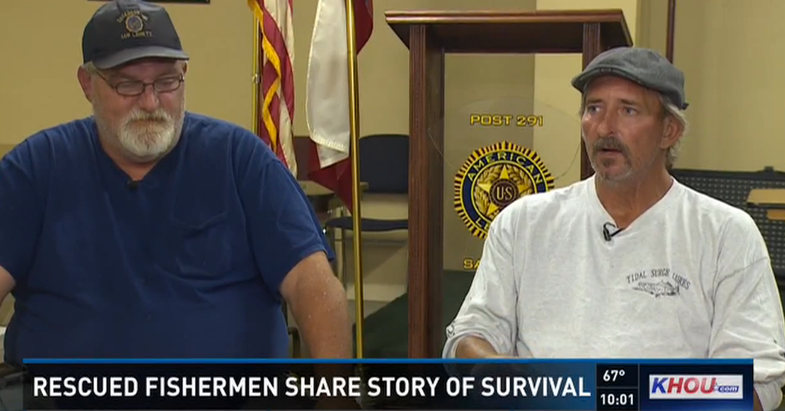 This week two Texas anglers are sharing their survival story after, late last month, their 20-foot Larson boat flipped, forcing them to spend 48 hours in the cold waters of Galveston Bay before being rescued by the U.S. Coast Guard.

CBS affiliate KHOU reports that the families of friends Michael Watkins and Raymond Jacik were initially concerned when the pair didn’t return from their fishing trip at the planned time. What they didn’t know was that waves had overtaken the men’s vessel and forced them into the water without lifejackets. Fortunately for Watkins, who can’t swim, an Igloo cooler surfaced, and he used it to float with Jacik to some pipes jutting up from the ocean floor nearby.

The men desperately tried to flag down passing ships, and took stock of the two water bottles and ¼ sandwich in the cooler. After a long night, they decided to make a break for a platform rig about a mile away. But Watkins says that they were separated when he panicked and turned back. For the next two days, both fishermen battled against the elements and thunderstorms to stay alive, neither knowing whether the other survived.

The U.S. Coast Guard found Jacik and Watkins’s overturned boat, presumed the men were dead, and almost called off the search. But that’s when pilot Zach Gross spotted Watkins clinging to the pipes, waving a shirt. Low on fuel, Gross and the crew made the daring decision to rescue both men. Jacik was later treated at Bay Areas Regional Center for hypothermia and a heart attack.

“But closer to land,” Jacik said.