This week, Washington D.C.’s National Zoo made headlines with a new discovery, published in Science Advances: As many as one... 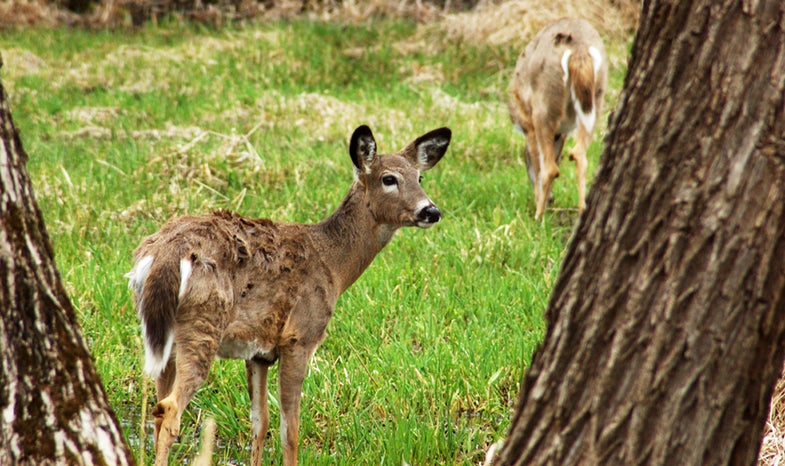 This week, Washington D.C.’s National Zoo made headlines with a new discovery, published in Science Advances: As many as one in four whitetail deer in some parts of the U.S. may carry malaria. Though the strain is considered non-threatening to people, the findings raise questions about whether the parasite is affecting deer populations, and how if so.

A press release by the University of Vermont summarizes the opinions of the study’s chief author, Ellen Martinsen:

Whether it is hurting white-tailed deer in America is an open question. Martinsen suspects not, because she’d expect to see more obviously sick animals. But [malaria expert Joseph Schall] wonders if, like some human malaria infections, the disease causes a low-level burden that hurts deer populations. They both agree that it is an area that calls for more research—and that the new study raises many other questions, including whether the parasite might infect dairy cows or other hoofed species.

According to Science, there are more than 100 types of malaria parasites found all over the world, but most are carried by birds and reptiles. Though malaria among whitetails has been widely reported this week as an entirely new discovery, a paper published in the Proceedings of the Royal Society of London documented whitetails with the parasite as far back as 1980; the new findings by Martinsen and her team do, however, detail the parasite’s prominence and where it tends to be found in the U.S. Researchers screened deer in 17 states for the strain and found 41 infected animals across 10 states. Most of the infected deer were concentrated in West Virginia and Kentucky, while none were documented west of Louisiana. Of the 300 deer tested, at certain testing sites as many as 25 percent carried malaria. Despite this, though, the parasite likely isn’t as widespread among whitetails as these numbers may suggest.

So why, given the amount of research done on deer, haven’t more scientists discovered malaria among whitetails? Martinsen told Science that, because the level of infection is so low, the parasite is hard to detect with a traditional microscope; it took special equipment at the National Zoo to trace malaria in mosquitoes back to deer.

“This discovery is so important and interesting because this turns out to be the only malaria parasite found in deer and it’s the only malaria parasite that’s been found in native American mammals,” says Robert Fleischer, Smithsonian Conservation Biology Institute, in this video. “It’s very unlikely it will spread to humans, but we do need to know what its impact might be on other wildlife.”

The Center for Disease Control notes that malaria among humans was eliminated in the U.S. in the 1950s.