Man Saves Dog From Cougar With His Bare Hands

A quick-thinking Vancouver Island man recently saved his beloved pet dachshund from the jaws of a starving cougar by chasing... 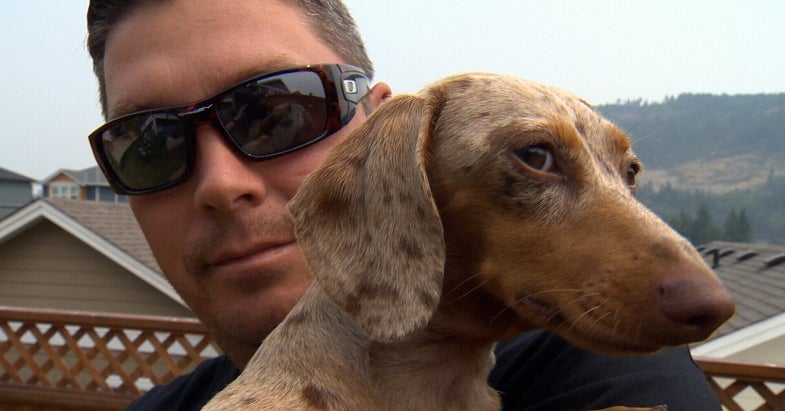 A quick-thinking Vancouver Island man recently saved his beloved pet dachshund from the jaws of a starving cougar by chasing down the predator, tackling it, and punching it in the face.

Shawn Hanson told CTV News he was on a fishing and camping trip near Ucluelet and in the process of cleaning several salmon when he saw something drag his dog Bailey into the underbrush.

“Out of the corner of my eye, I see a little flash,” Hanson said. “I look down, and it’s a small cougar dragging my dog off into the bushes.”

He started chasing the animal, amazingly caught up with it, and grabbed it from behind. When it still wouldn’t let go of his pet, he punched it in the face, momentarily stunning it long enough for him to rescue Bailey.

“I was expecting it to start swatting at me and come at me, but I think it was pretty stunned to be hit,” he said.

Once Hanson handed off Bailey to a friend, he grabbed a gun, tracked the cougar again, and fired a warning shot, but it didn’t scare the cougar. In fact, the lion moved toward him.

“It just kept staring at me,” Hanson said. “I raised the rifle and waited a second. It took two more steps, and I had to put the cougar down. It was pretty much over at that point.”

Hanson called conservation officers and reported the incident, though officers said they had already received reports of a cougar near houses and were in the process of tracking the animal. It’s unlikely any charges will be filed against Hanson.

“Every person has the right to protect their property and personal safety and in this case the cougar was failing to retreat,” said conservation officer Brittany Mueller.