Last week, a state of emergency was declared in four south Florida counties after a toxic-algae bloom has continued to... 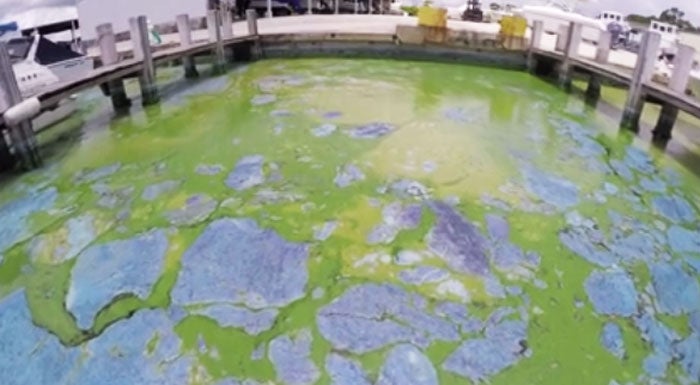 Beaches have been closed and residents have been overpowered by the odor of the thick goo.. Facebook/Balance For Earth
SHARE

Last week, a state of emergency was declared in four south Florida counties after a toxic-algae bloom has continued to amass in size, threatening wildlife and residents.

Water discharged from Lake Okeechobee into the St. Lucie River and the Indian River Lagoon has produced the blue-green algae, according to USA Today_._ Since late January, more than 150 billion gallons of water have been released from the lake, which has lowered the salinity of the river and lagoon, as well as ****depleted their nutrients, allowing the algae to grow. The bloom has now flowed from the river and lagoon to area beaches, posing a threat to swimmers.

The Florida Department of Health states that the blue-green algae can affect the “gastrointestinal tract, liver, nervous system, and skin.” The department added that children and pets are especially vulnerable.

Officials have closed beaches as a result, and residents have been overpowered by the odor of the thick, green goo. Moreover, marinas have reported canceled reservations from boaters and fisherman, according to the Miami Herald. “This town is 100 percent driven by tourism, but the tourism is empty,” Jordan Schwartz, owner of Ohana Surf Shop, told CNN. “…It’s the height of summer, and we have empty beaches, empty restaurants, empty hotels.”

But the toxic mess has affected more than just humans. “Animals are in distress, some are dying, [and] the smell is horrible,” Schwartz added. “You have to wear a mask in the marina and the river. It’s heartbreaking, and there is no end in sight.”

On social media, users have posted photographs of animals struggling to swim in the water, and on Saturday, a dead manatee was recovered from polluted waters. The Florida Department of Environmental Protection states that blooms lasting for longer than a few months can be harmful to the ecosystem, and fish can die from the lack of oxygen in the water.

Unsurprisingly, the algae bloom has caused an uproar and resulted in protests from residents, who say that the government should have acted sooner, since it has long known of the problem.

For now, there’s no easy fix to the situation, according to Bill Louda, a research professor at Florida Atlantic University, who has been testing algae along the polluted coast. “If you kill this algae, you’re going to kill the sea grass, the macro algae, all the good phytoplankton that the fish need, everything else,” he said in a CBS News article.