On the evening on May 9th, James Yerhart was fishing for walleye in the glow of the lights from Dam... 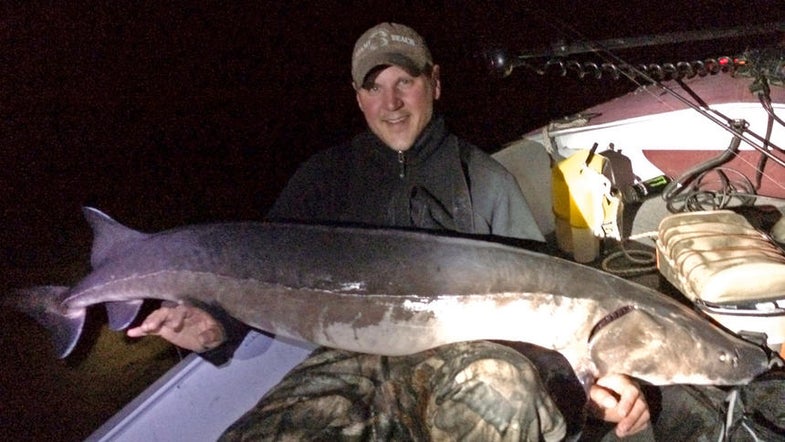 On the evening on May 9th, James Yerhart was fishing for walleye in the glow of the lights from Dam No. 5 on the Mississippi River north of Winona, Minnesota when he incidentally hooked a lake sturgeon large enough to possibly break the state record.

A story from the Grand Forks Herald says that while sturgeon were nearly wiped out, efforts to bolster the fish’s populations throughout the upper Midwest seem to be paying off, and for the first time this year, Minnesota is allowing a catch-and-release season for the fish.

But Yerhart said that wasn’t the goal of his outing and that he, his friend, and his uncle, were simply trying to make the most of a slow day on the water when the big fish latched on to a three-inch Mister Twister jig and started towing the men’s 14-foot boat across the water.

“I had gotten a couple of snags. I thought I had another snag,” Yerhart said. “Fishing below the dam, it was like being under a bunch of streetlights. I could see my line heading north, toward the dam. It was definitely moving.”

Yerhart said mayhem ensued, and the three men spent the next hour scrambling around the boat to make sure the fish didn’t tangle on any other rods, lines or the anchor rope. Eventually the big fish stripped so much line from Yerhart’s reel they needed to pursue the fish up and down the river.

“Basically, all we were doing at that point was following the fish. I thought it was either a big catfish or a sturgeon. After it had taken us 600 or 700 yards, I knew it had to be a sturgeon,” Yerhart said. “I’m saying he took us a mile downstream, but I bet it was even farther than that. We couldn’t even see the lights of the dam anymore.”

As the fish tired, Yerhart said he started worrying about his gear—armed with just 10-pound test line, he knew the stress had to be taking its toll and wondered if the sturgeon might eventually break off.

But the line held, and Yerhart was eventually able to get the fish topside, hoist it onto his lap, and snap a few photos with his iPhone.

According to his calculations, Yerhart said he estimates the fish weighed between 85 and 125 pounds, though the current Minnesota state record might offer a better hint of the fish’s actual weight. That sturgeon, caught in 1994, was 70 inches long, with a girth of 26 ½ inches, and weighed 94 pounds.

Yerhart was required to release the fish so there’s no way to officially determine whether he broke the state record, though he said that doesn’t deter from the experience.

“All I do is hunt and fish,” he said. “I go out west elk hunting and I fish all the time, and I can tell you this was the most spectacular things I’ve ever done.”