Photo via dailyrecordnew.com As the Daily Record reports, one morning earlier this month an elk calf miraculously survived a car... 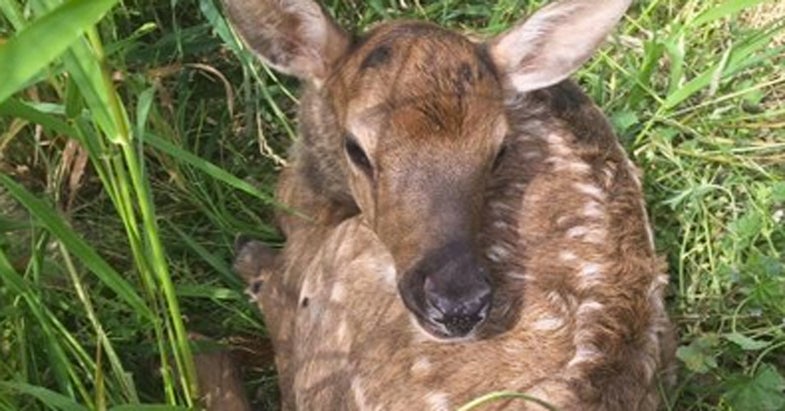 As the Daily Record reports, one morning earlier this month an elk calf miraculously survived a car crash that killed its mother, and, thanks to a quick-thinking Washington State trooper, it’s now getting a chance at life.

Trooper Christine White had just started her shift June 1st when she was dispatched to the scene of a collision between a vehicle and a “super pregnant” cow elk, near the state’s Snoqualmie Pass. When White and another trooper arrived, they discovered the elk had gone into labor, likely because of the crash, and that the calf had already been born.

Surprisingly, the small elk was unhurt aside from a few bumps and scratches. However, because the calf was unable to feed on its mother’s colostrum—an important antibody-rich milk critical for the survival of most newborn animals—the fate of the calf came into question.

Through Facebook and a few phone calls, White was able to locate horse colostrum, which she hoped could provide temporarily sustain the calf. Soon afterward, an area veterinarian contacted White and said she had cow colostrum, a closer substitute, that she could offer.

Before Washington Department of Fish and Wildlife staff took the calf to a rehabilitation center in Wapato, White named it Moose. The staff at the center said Moose was born close to full term, though it may take several weeks to know whether it received the colostrum in time to survive past infancy.

Whatever happens, White is doing what she can to help the calf, including setting up a Facebook page with updates on its progress. Likewise, White said that the incident will likely be one of the strangest she’ll have on patrol.

“I’ve had human babies be born, but not an elk,” she said. She added that she’s been dispatched to plenty of vehicle collisions with deer and elk, but said, “I’ve never been on one where it produced a baby.”