Monarch Butterflies May Be Listed as Endangered Species

The U.S. Fish and Wildlife Service is reviewing a proposal to place the monarch butterfly on the endangered species list.... 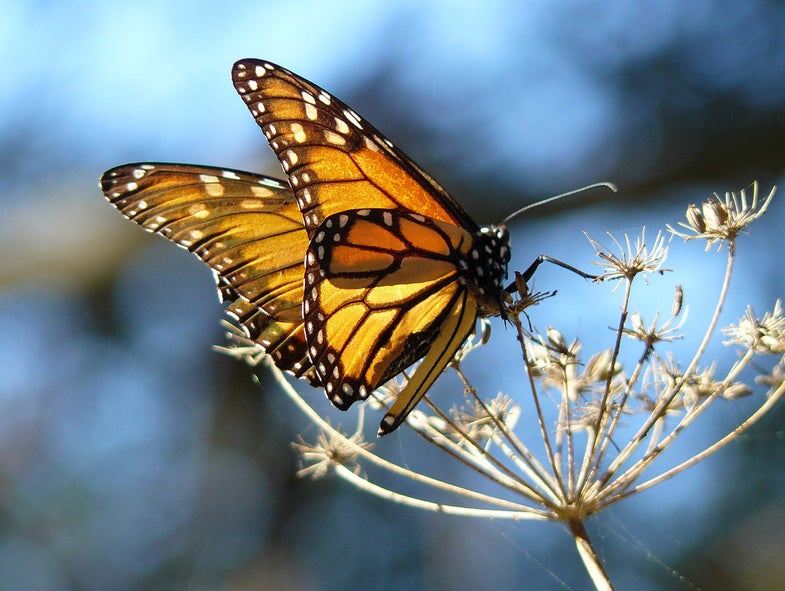 The U.S. Fish and Wildlife Service is reviewing a proposal to place the monarch butterfly on the endangered species list. Monarch populations have fallen around 90 percent in the last 20 years, from one billion of the insects to just 35 million. Now, the Center for Biological Diversity has joined monarch butterfly expert Lincoln Brower and conservation groups to petition the FWS to list the monarch for protection, according to the Washington Post.

The use of herbicides and the clearing of grasslands to plant crops have both sharply reduced the amount of milkweeds that are the sole food source for monarch caterpillars. The same loss of habitat that has devastated monarch populations is also threatening pheasant and quail populations in the Midwest. In fact, the Monarch Joint Venture (MJV), a partnership of federal and state agencies, non-governmental organizations, and academic programs, is now partnering with Pheasants Forever and Quail Forever to recognize that game and non-game species in farm country depend on the same conservation efforts.

Monarchs make a multi-generational migration from Canada to Mexico every year. Loss of wintering habitat has occurred due to deforestation, much of it illegal, in Mexico. However, according to expert Brower, the greatest threat to monarchs is taking place on their migratory routes through the Midwest. “[The] most catastrophic thing from the point of view of the monarch butterfly has been the expansion of crops that are planted on an unbelievably wide scale throughout the Midwest and have been genetically manipulated to be resistant to the powerful herbicide Roundup,” he says.

There is certain to be controversy as the FWS reviews the proposal. Monarch butterflies have been raised by millions of schoolchildren and even by astronauts on board the international space station. The monarch is the official state butterfly of seven states. Nevertheless, agricultural groups believe they are being unfairly singled out for blame. “The ecology of the system is too complex to blame Roundup for the decline of milkweed or monarchs,” Iowa Farm Bureau Federation environmental policy adviser Rick Robinson said in a statement when conservation groups filed their petition this summer. “The Endangered Species Act can’t affect unfavorable wet and cold weather.” Robinson said the petition represented a “misguided attack” on genetically modified crops that can potentially benefit the environment by increasing yields per acre, thus allowing more land to be preserved.