A young bull elk (moose to us in the States) spent several hours inside an office building in Dresden in... 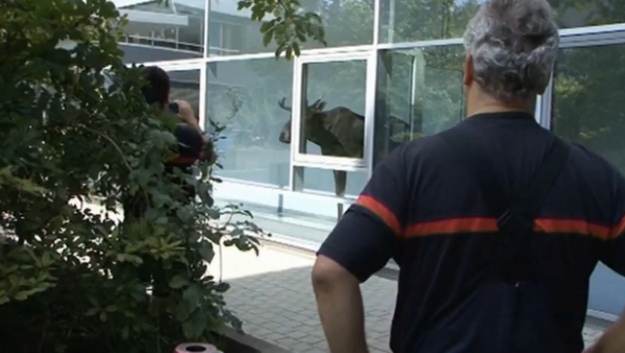 A young bull elk (moose to us in the States) spent several hours inside an office building in Dresden in the German state of Saxony last week, most of the time calmly looking out the glass windows of the café foyer. Police cordoned off the area while officers of the Dresden Zoo and Hunting office tried to get the moose into a container. Finally, the moose was shot with a tranquilizer dart and taken out of the building, according to NBC News.

The moose had been seen around Dresden during the previous week. The animal ran into the office building after a crowd gathered to look at it and the police arrived. While moose aren’t native to the area, they do migrate through from time to time. The moose probably came from Poland or the Czech Republic, according to a forestry authority spokesman. The moose was released in eastern Saxony near the Czech and Polish borders.