In a recent study, researchers argue that should cougars return to their historic range in the East, they could help... 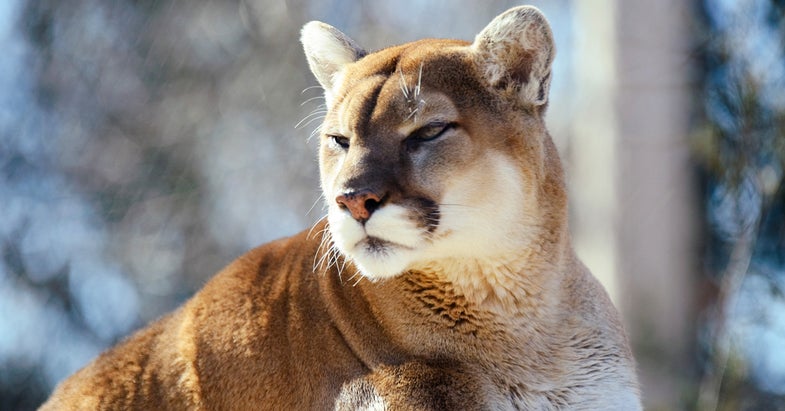 In a recent study, researchers argue that should cougars return to their historic range in the East, they could help thin overabundant deer populations and thus significantly reduce deer-related automobile accidents.

According to the New York Times, researchers claim that the return of the cougars could prevent 155 human fatalities caused by deer-related car crashes over 30 years. Additionally, they claim that 21,500 injuries could be prevented and $2.3 billion saved during that same time. Though the researchers acknowledge that cougars do kill people on (rare) occasion, their estimates place the number of lives that could be saved at more than 100 over 30 years. (Note: the Times reports that cougars “regularly [kill] humans in the Eastern United States,” but, on average, cougars have killed fewer than one person per year in the U.S. and Canada.)

The scientists based their findings on a study of 19 states, including four whose cougar populations were completely lost in the early 1900s. The study focused on deer population growths, as well as the number of accidents caused by deer. They coupled that information with the fact that a cougar can kill up to 259 deer in six years. Researchers also took into consideration the 850 square miles of forested land needed to maintain sustainable cougar populations.

The recovery process would be difficult for the cougar, in part because the 19 states studied cannot currently support a large cougar population. Plus, according to Laura R. Prugh, a wildlife scientist at the University of Washington who helped write the study, the public would more readily accept a natural recovery than it would a breeding program. Decreasing car wrecks by increasing the number of large predators, however, would still be difficult for people to accept, she says. “The idea of being killed in a car crash with a deer just doesn’t scare people the way the idea of a cougar leaping on your back in the woods does,” Prugh said.

According to komonews.com, however, deer pose a much greater threat to safety than cougars do. Deer cause 1.2 million auto accidents, resulting in more than 200 deaths, and nearly 30,000 injuries, each year. Those crashes are responsible for $1.6 billion in damages, medical bills, and clean up.

Cougars could once be found throughout the East, but their populations began to wane in the 19th century, as logging and development increased. The Times piece refers to the cougar in question as the “eastern cougar,” though the U.S. Fish and Wildlife Service speculates that true eastern cougars have long been extinct (as F&S has covered). Despite this, the species remains protected by the Endangered Species Act. The cougars now found in the eastern U.S. most likely belong to a western cougar subspecies, which have migrated east over the past several decades. In the past few years, in particular, the number of cougar sightings in the eastern cougar’s historic range has increased considerably. In 2015, for instance, Tennessee officials confirmed the first official cougar in the state in more than 100 years.

Editor’s note: We believe that hunting is the most effective way to control overabundant deer populations. The sentiment was not expressed in this post when it was first published, because we assumed, perhaps unfairly, that it went without saying. (Updated July 22, 9:30 a.m.)