Tim Engelland, an angler from Gering, Nebraska, is likely heading into the state’s record books after catching a relatively small,... 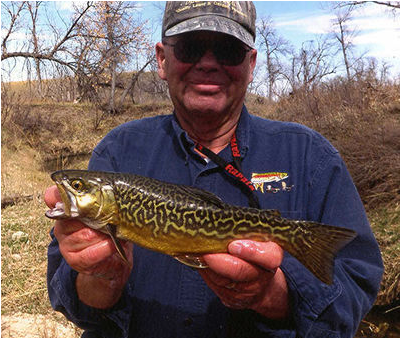 A story from the Star Herald says Engelland caught the fish on Saturday, April 4th, while fishing with his wife Roxanne on a private-access portion of West Hat Creek. The pair was walking along the bank, tossing spinners into the water, when they encountered a pool full of trout. Amongst all the other fish, was Engellman’s prized catch.

Tiger trout are actually a cross between a brown and brook trout and their distinctive color patterns make them easy to identify. Commonly, a tiger trout retains the copper and gold hue of a brown trout, and the marbled, contrasting stripes of a brook trout. Comparatively speaking, Engelland’s fish was small, tiger trout can grow to weigh several pounds, but it was big enough to eclipse the previous state record by a mere 3 ounces.

But what makes Engelland’s catch even more unique is the fact that years ago he set a goal of not only fishing in all 50 states, but to also catch a different freshwater species of fish in each state. He said he wanted to experience both common species anglers seek, and the not-so-common exotics anglers typically overlook. It took him 10 years, but he accomplished his mission, and his record tiger trout is just one more memory he can add to the others.

“We had a ball doing it. I wish I could do it again,” Engelland said. “I love catching different fish. I love fishing different places.”