Gila trout have enjoyed a successful spawning season at New Mexico’s Mora National Fish Hatchery. According to a press release,... 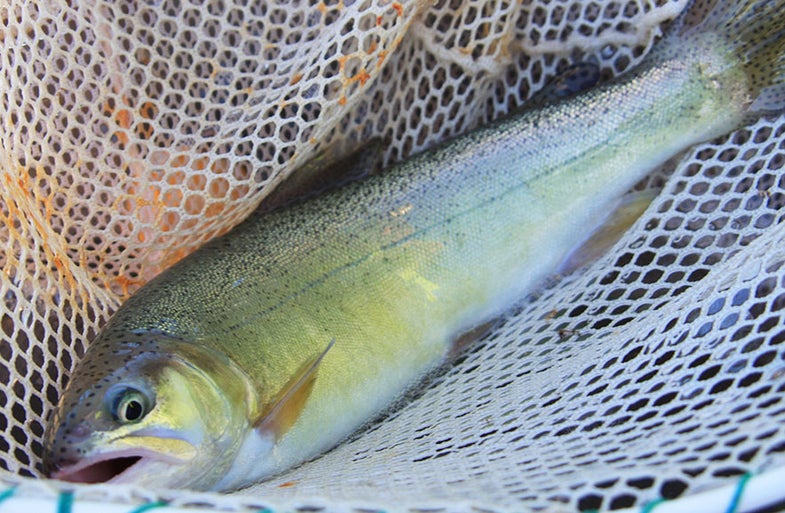 Gila trout have enjoyed a successful spawning season at New Mexico’s Mora National Fish Hatchery. According to a press release, the federal facility successfully spawned 560 pairs of Gilas in 2016, yielding 122,423 eyed-eggs. Those eggs should result in nearly 80,000 fingerling trout that will be stocked in the fall. Of those, 18,825 will be stocked in Arizona waters, while 52,125 will be placed in New Mexico streams.

Nathan Wiese, hatchery manager at Mora, said that the successful spawning should double the number of trout, as well as the number of stocked waters, from 2015. The bulk of the fish will be placed in streams closed to fishing in order to help boost Gila populations. Per the Arizona Game and Fish Department, the Gila trout is one of the rarest trout species in the country. Though the fish is native to a number of river drainages in Arizona and New Mexico, its range was limited to only four streams by the 1950s, and the species was listed as endangered in 1967.

Currently, the species’ greatest threat is hybridization with non-native rainbow trout. But the Gila has enjoyed a population revival, since conservation efforts have been successful in recent years. The species was reclassified as threatened in 2006.

In fact, Gila trout have recovered enough to be included in [Arizona’s Trout Challenge](http:// https://www.azgfd.com/Fishing/TroutChallenge/). That program encourages anglers to explore and learn about Arizona’s trout through two separate categories. The first is based on catching each of the state’s five species of wild trout, while the second includes stocked trout, in addition to wild fish. Both categories include Gilas.

Despite recent gains, fishing for Gilas in Arizona and New Mexico involves regulations designed to preserve and propagate the states’ respective populations. For the Arizona Wild Trout Challenge, anglers can pursue only wild Gilas in Frye Creek, though stocked fish are available in Frye Mesa Reservoir. New Mexico allows anglers to pursue wild Gilas in limited streams as long as a free permit is acquired.

*The original title of this post stated that the hatchery is in Arizona, when, in fact, it is in New Mexico, as the piece makes clear. We regret the error.