Nine-year-old Orlando area boy James Barney was able to fight off a nine-foot, 500-pound alligator that attacked him as he... 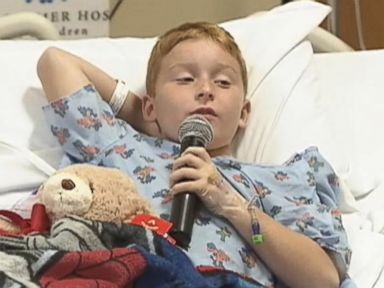 Nine-year-old Orlando area boy James Barney was able to fight off a nine-foot, 500-pound alligator that attacked him as he swam in Lake Tohopekaliga in St.Cloud, Florida. Barney calmly described the attack from his bed in the Orlando’s Arnold Palmer hospital.

The attacking gator bit him on the backside. “At first I thought someone was just playing with me and I didn’t know what happened,” he told ABC News. “I reached down to go grab it and I felt its jaw, I felt its teeth and I didn’t know what to do, so I immediately reacted and hit a couple of times, and then finally I had enough strength left to pry its jaw open a little.”

After escaping the gator’s jaws, Barney was able to swim to shore while witnesses called 911. “He was crawling up the shore, screaming and crying and gator bites all over his back,” said one bystander. Barney was airlifted to the hospital. He had three superficial bites and 30 toothmarks and scratches. Doctors found a tooth in one of his wounds. Barney wanted to keep it and wear it on a necklace, but Florida wildlife officials needed the tooth to help them identify the alligator that attacked James.

Lake Tohopekaliga is closed to swimming. Asked if he would swim in the lake again, Barney replied “Negative.”

Watch more news videos | Latest from the US